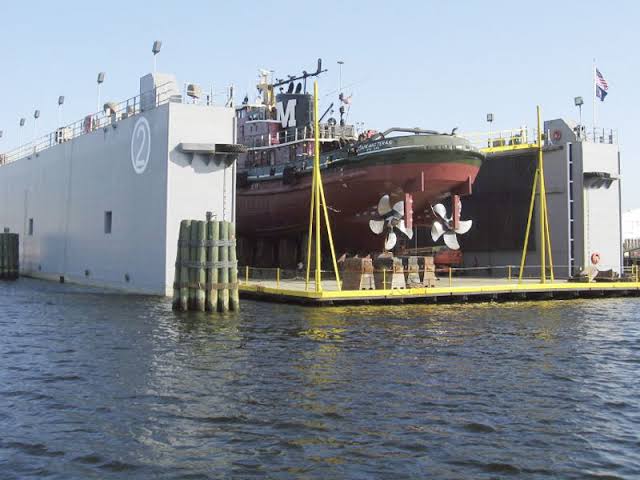 The Nigerian Maritime Administration and Safety Agency, NIMASA, and the Nigerian Navy have concluded plans to put the agency’s controversial floating dock to commercial use with a view to raising NIMASA’s revenue profile.

Speaking to journalists on the agency’s achievements in 2019, its Director General, Dr. Dakuku Peterside, said that the agency, before now, was spending over $30,000 to maintain the floating dockyard.

He however, disclosed that the agency has reached an agreement with the Naval Holdings Limited, a sub-unit of the Nigerian Navy, to keep the dock busy and commercially profitable.

Providing more details into how the floating dock has turned out to become a financial drainpipe for NIMASA, the Executive Director Operations of NIMASA, Eng Rotimi Fashakin, confirmed that the insecurity in the Niger Delta region made it difficult for NIMASA to berth the dock at Okerenkoko as originally designed.

Presently, he said the multi billion naira facility is now lying at the Naval dockyard in Lagos pending when the agency would get a permanent location to operate it.

He stated: “Initially when the floating dock was acquired, the design was for it to berth in Delta State. But even at that time, there were reports advising to the contrary. There were lots of surveys advising to the contrary, these reports are still there till date. When we got here, we were forced to review all these reports and take a decision that we think would serve all interest in the shipping community.

“The floating dock was not conceptualized by the Dakuku Peterside’s administration. We only inherited it just like the Buhari administration inherited projects and goes ahead to actualize it.

“Indeed, the floating dock was supposed to go to Okerenkoko in Delta State, but the conditions that exist now, for the dock to get to Okerenkoko now is almost impossible, a dock is supposed to serve the shipping community as a commercial facility, but which company or vessel would be bold enough to travel to Delta State because of the insecurity.

“When the dock landed in Nigeria, there were various state governments that requested for it, all these are on record. When it came in, we thought of many ideas, first was to get an operator to operate it, but this is a government asset and not something you can just give to an operator. NIMASA is a regulator and not an operator, so giving the dock to an operator also needs to go through the bureaucracy of government.

“The other thing was getting a place to berth it, if you know the complexity of a floating dock, the draft that you need to keep it and operate it is 12 meters. The contractor was spending over $30,000 keeping the dock afloat for many months and we had to pay many months demurrage on that.

“Eventually we reached a situation where we had an agreement with the Naval Holdings Limited, a sub unit of the Nigerian Navy to keep the dock. We are still looking forward to having a formal MoU which we would have an operator operating the floating dock.

“The Navy also has a graving dock, the initial report shows that if that floating dock is operating as it is, it would imperil the graving dock, so the Naval Holdings Limited suggested another spot where we could use it. A consultant was asked to assess the spot, the report of the consultant is out, we would need to do some dredging at that spot where we can now operate the floating dock.”