The Ogoni people of Rivers State have called for the political marginalization of their ethnic nationality of over 55 years, in Rivers State, to be addressed as the 2023 general elections approach.

In a press release made available to the GbaramatuVoice newspaper and signed by a former Movement for the Survival of the Ogoni People, MOSOP, president who is also the convener of Ogoni Democracy and Development Forum, ODDF, Comrade Legborsi Saro Pyagbara, it said: “As the clock ticks to the 2023 general elections and political parties are making frantic efforts to meet the deadline set by INEC for the emergence of candidates to represent their various political parties, we wish to draw the attention of leaders of the political parties to seize this opportunity to address the political injustice that has been done against the Ogoni people over the years by successive governments in Rivers State since its creation. We are appealing that the leaders should demonstrate statesmanship, equity, fairplay and sense of justice by ensuring that a Rivers governor of Ogoni extraction emerges as governorship flagbearers of their various political parties, particularly the PDP and the APC.”

The release went on to trace the monumental struggle the Ogoni people launched in 1990 to fight the injustice meted out to the Niger Delta people and explained that the political marginalization of the Ogoni was part of the demands of the Ogoni Bill of Rights.

Pyagbara lamented that even though the Ogoni contributed immensely to the birthing of the present democratic engagement in Nigeria, the people have been completely abandoned and called for this anomaly to be addressed.

He used the example of the June 12, 1993 where power was deliberately given to the Yorubas in 1999 to right the wrong meted out to them by the annulment of the exercise, to buttress his point noting that nothing of the sort has been done to pacify the Ogoni people.

He said this has lingered for 55 years that Rivers State was created and 32 years since the Ogoni Bill of Rights was launched.

“It is on the strength of the above that we are persuaded to appeal to the leadership of the political parties at the state and national levels and to call the attention of well meaning Nigerians to the anomaly regarding the Ogoni people,” he lamented.

The release went on to list the governors of the state from 1967 to the present day as well as their ethnic groups and pointed out that the ethnic nationality as a whole made up of Ogoni, Opobo/Nkoro, Oyigbo and Andoni known as Rivers South East was the only axis yet to produce governor.

He also, in tabular form, showed that Ogoni was yet to produce deputy governor, Chief Judge of Rivers State Judiciary, and Speaker of the Rivers State House of Assembly.

Pyagbara concluded by explaining that the Ogoni cleanup exercise is ongoing but at a slow rate. 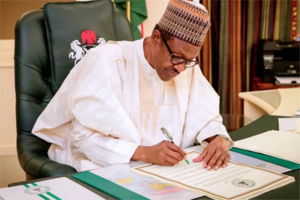