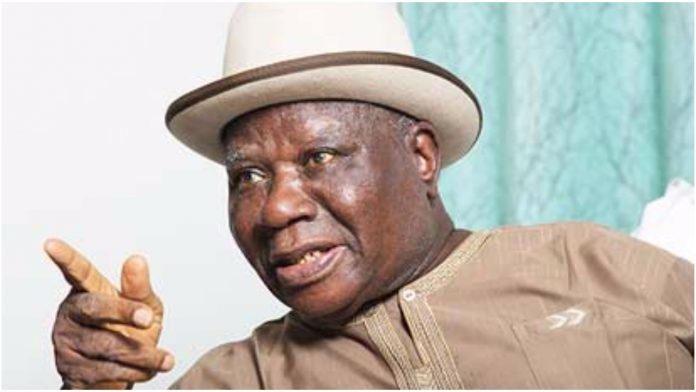 National leader of the Pan-Niger Delta Forum (PANDEF), Chief Edwin Kiagbodo Clark yesterday declared that the $308 million recently recovered Abacha loot were proceeds of oil and gas produced in the Niger Delta. He, therefore, maintained that the funds should be invested in infrastructure development of the South-South zone.

Clark, who spoke in a statement he issued from London, said the Niger Delta region had been marginalised and without any fresh federal infrastructure project, urging the Federal Government to plough the Abacha loot back into the region.

“While I congratulate President Muhammadu Buhari on the recovery of another Abacha loot amounting to $308 million, I, however, observe that again, the Niger Delta Region is left out in the infrastructure development of the country both in the 2020 federal budget and in the distribution of the recovered Abacha loot for development.

“I notice that the only road projects to benefit from the recent Abacha loot are the Lagos-Ibadan Expressway (Western Region), the Abuja–Kano Road (Northern Region) and the Second Niger Bridge (Eastern Region) which is meant for the eastern part of the country, even though it starts from Asaba in Delta State.

“This, indeed, is a demonstration of Federal Government’s repeated and deliberate neglect of the Niger Delta region, even though the Abacha loot came substantially from the region.

“It must be admitted that the revenue that accrued to the Federal Government, which was deposited in the Central Bank of Nigeria (CBN), from where Abacha looted them is the product of oil and gas revenue derived from the Niger Delta region.

“But the Federal Government, has again, deliberately abandoned the East West Road, which is the most important economic road in the country. It was started over 10 years ago, even when the collapsed part of the road has been left to the state governments of the region to fix, particularly the recent total collapse of the Benin, Edo State to Warri in Delta State sections.

“The question should then be that, is the Niger Delta not part of Nigeria? It is indeed most offensive and insulting to the people of the Region when in response to our complaints and agitations, some politicians who were never voted for reply that the establishment of the Niger Delta Development Commission (NDDC) and the Presidential Amnesty Programme (PAP) were given to us, and yet we complain,” he stated.

He insisted that marginalisation, oppression, injustice and neglect of the Niger Delta Region should not be allowed to continue and that the people of the Region demand that the Federal Government include the completion of the East West Road as one of the major infrastructure projects to be developed with the Abacha loot.

Clark noted that most Nigerians were not satisfied with a similar Abacha loot recovered from Geneva on how it was expended, adding however, that it was gratifying that this particular loot was being tied to development of road infrastructure in the country, but that the Niger Delta region must not be left out.