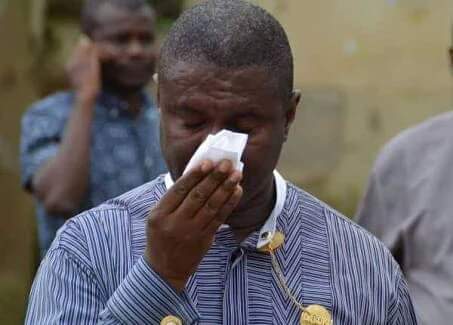 The House of Representatives’ Public Accounts Committee on Monday ordered the Director-General of the Nigeria Maritime Administration and Safety Agency, (NIMASA), Dakuku Peterside, to appear before it within 48hours over the inability of his Agency to tender its audited accounts to the Auditor General of Federation in the last four years.

The Committee is currently probing into allegations bordering on “deliberate and reckless refusal by non-Treasury Funded MDAs to render audited accounts to the Office of the Auditor General of the Federation, during which it ruled after the testimonies of the Director, Finance and Account, Mr Victor Onuzuruike who represented the Agency.

The Committee which also demanded for details of a N13bn debt being owed the Bank of Industry (BoI) by Heritage Bank Plc, had queried the explanations of the NIMASA Director that the audited report for the period under review was ready but that it has not been approved by the Board of the Agency, describing it as “unacceptable and afterthought”.

The members frowned at the attitude of the Agency for failing to render the audited Account for over four years and consequently directed the Clerk of the Committee to write to the NIMASA boss to appear before the Parliament within 48 hours, failure which a bench warrant of arrest would be issued against him.

While expressing displeasure over the failure of some accounting officers of some of the invited MDAs to be at the hearing, the Chairman of the Committee, Rep. Oluwole Oke (PDP, Osun), lamented that the MDAs stayed off despite the adequate notice in newspaper advertorials and invitation letters.

He said the refusal of the agencies to render their audited accounts not only violated the constitution but a deliberate efforts to sabotage governance in the country.

Consequently, the chairman threatened to expose the identity of MDAs who are in the habit of withholding accounting information in a “name and shame”, undertaking that would portray them before Nigerians for what they truly are.

According to Oke, “if you don’t render audited accounts to the Auditor General’s office, how do you expect him to balance government’s accounts for a given year? How do you expect the government to keep track of its incomes and expenditures and plan ahead for the future”?

“The art of withholding accounting information from constituted authority is not only corrupt but a crime against the country as a whole. And we as members of this Parliament will do our job by naming and shaming such MDAs.

“And contrary to some beer parlour insinuations that this 9th Assembly is ‘yes’ Parliament, we actually mean business and we will do our job. This House under the leadership of Hon. Femi Gbajabiamila as Speaker, this house will call a spade by its name, and be rest assured that by tomorrow, you’ll see your names on the pages of newspapers.

“We, however, thank those chief executives who had made out time to be present here today, and we want to assure you that this hearing is not targeted at witch-hunting, anyone.

“We’re a Parliament of the people charged with the responsibility of identifying and exposing corruption and also recommend punitive measures, that’s beside our primary role of making laws for the good governance of our country,” he said.

He also warned the heads of the MDAs to stop hiding under the guise of the absence of governing Boards that would approve their audited Accounts as reasons for not coming before the parliament with the documents as the long arm of the law would catch up with such people.

While grilling the managing director of the Bank of Industry (BoI), Mr. Olukayode Pitan, the panel asked him to verify and confirm the authenticity of the documents in its possession as submitted by its officials and he told the panel that his organization actually sent same, just as he noted it has complied with accounting regulations covering the years under review.

He said for all those years, the bank never defaulted nor lag behind in rendering its audited accounts to the AuGF office because not only are they audited by the CBN, they are also FIRS.

He added saying that “those years were very profitable years for the bank and it paid adequate dividends and taxes on its profits.

Asked of the N18bn owed the bank by a commercial bank, Heritage Bank Plc, the BoI boss told the panel that the debt has been reduced from N18bn to N13bn.

The panel which expressed appreciation to the bank for being forthcoming with information, however said it could escalate its probe of it if it peruses it documents and finds inconsistencies with what should actually obtain based on the Auditor General’s report.

Other agencies grilled on Monday include: the Department of Petroleum Resources (DPR), the Corporate Affairs Commission (CAC), Council fe the Regulation of Freight Forwarding in Nigeria, the Assets Management Corporation if Nigeria (AMCON) among others.

Dickson condemns those opposed to nomination of Akinkugbe

NDDC N70.4bn Scandal: Any person indicted must be brought to book...