President Muhammadu Buhari today, June 24, 2021 met with the national executive and leaders of the Ijaw Nation Congress, INC, at the Presidential Villa, Abuja.

President Buhari at the meeting, commended the leadership of INC, led by Professor Benjamin Okaba. on their recent affirmation of belief in a United Nigeria and supporting the fight against insecurity by developing internal control mechanisms. 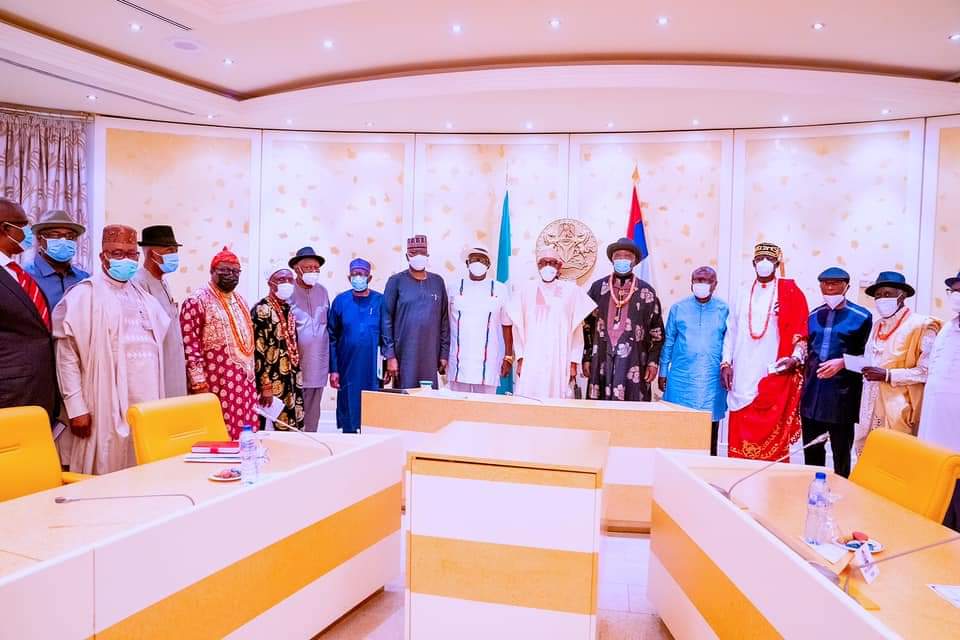 He implored the leadership of the association to use its influence ‘‘in making sure that we keep working together to keep this country a united, indivisible entity, so that we can tackle our problems together and overcome our challenges together.’’ 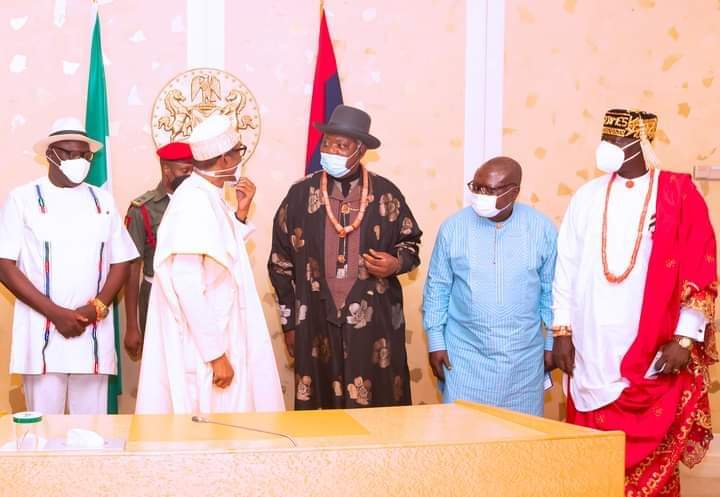 The President also used the occasion to address some demands of the association on several issues including environmental degradation, restructuring, creation of states, allocation of operational licenses for marginal fields to Ijaw people, inauguration of the Board of the Niger Delta Development Commission (NDDC), among others. 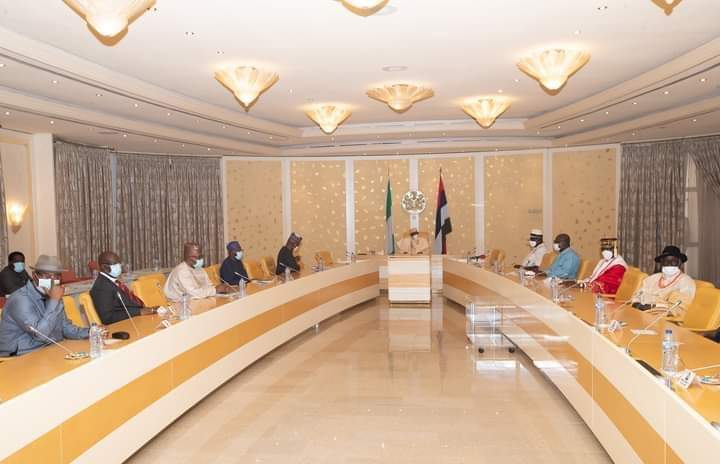 On the Hydrocarbon Remediation Project, President Buhari said he had directed the Federal Ministry of Environment to ensure that the remediation efforts in Ogoni are implemented with a high percentage of local content and inclusion of the surrounding communities.

Similarly, the President said the National Oil Spill Detection and Response Agency, under the same ministry of Environment, is working to ensure that oil spills are reduced and new ones prevented while all relevant agencies of government have been directed to ensure that they enforce compliance by the International Oil Companies to international best practices.

Addressing their call for immediate restructuring, the President noted that the National Assembly whose responsibility it is to ensure that the constitution responds to the call for a restructured Nigeria has already concluded regional consultations.

‘‘As soon as they finalise the process, necessary action would not be delayed on my part,’’ he said.

On the creation of two additional states and more local government areas for the Ijaw people, the President said it is a legislative matter, which should naturally be handled by the National Assembly with concurrence at the state levels.

Also commenting on the allocation of operational licenses for marginal fields to Ijaw people, the President said while he completely agrees with the demand,‘‘the process of granting licenses is guided by laid down rules and regulations, most of which even favour local content and local contractors. I see no reason why they should not be granted such licenses if they qualify.’’

On NDDC, the President pledged that the Board would be inaugurated as soon as the forensic audit report is submitted and accepted.

‘‘A contentious issue that has been a subject of discourse amongst the Ijaw people of recent has been the need for the Niger Delta Development Commission to live up to its billing by delivering the required succor to the people of the region.

‘‘Based on the mismanagement that had previously bedeviled the NDDC, a forensic audit was set up and the result is expected by the end of July, 2021.

‘‘I want to assure you that as soon as the forensic audit report is submitted and accepted, the NDDC Board will be inaugurated.

‘‘However, I would like to implore you that the Ijaw National Congress should play a more active role in making sure that the mismanagement that occurred in the past is not repeated,’’ he said.

The President also assured the leadership of INC that the completion of the East-West Road remains top on his infrastructure agenda, adding that the occasional disturbances by youths in some communities along the route of construction work would require the close attention and guidance of leaders in the region.

‘‘Furthermore, we have made considerable progress with the construction of the Bonny to Port Harcourt Bridge,’’ he said.

In his remarks, Professor Okaba urged the President to mandate the Ministry of Petroleum Resources to direct the relocation of the headquarters of all oil companies to their operational bases in Ijaw land and the Niger Delta region.

‘‘The excuse of insecurity is no longer tenable for it is common knowledge that nowhere in Nigeria is safer than the other. Secondly, the revamping of the major ports at Onne, Warri, Port Harcourt, Bonny will accelerate economic growth, reduce joblessness, youth criminality and contribute to national unity and stability,’’ he said.

Reaffirming strong faith in the ‘‘overall and mutual benefits of true federalism and resource control to the prosperity and stability of Nigeria,’’ Okaba assured the President that the Ijaws ‘‘have no secessionist agenda.’’