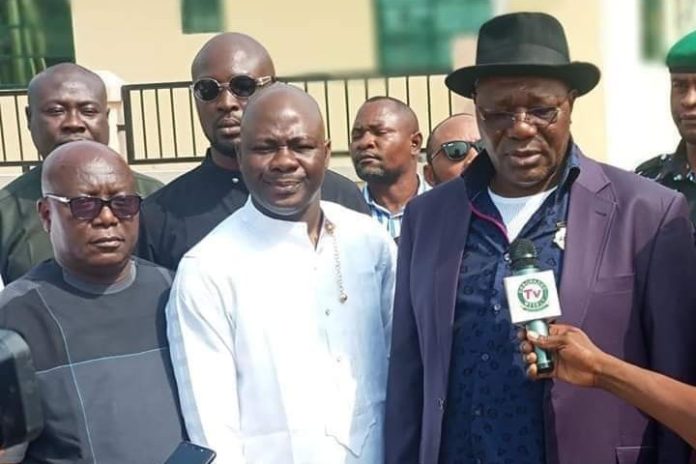 Deputy Governor of Delta State, Deacon Kingsley Burutu Otuaro has said he is delighted for the buildings donated by Delta state Government through its agency, Delta State Oil Producing Areas Development Commission (DESOPADEC), to the Nigerian Maritime University, Okerenkoko, for use as lecturers accommodation.

In a press statement by Bulou Kosin, Senior Special Assistant on Media, to the Deputy Governor of Delta State on Jan. 26, and made available to GbaramatuVoice, Otuaro expressed his delight shortly before cutting the tape to inaugurate the facility, being four units of 2-bedroom bungalows.

The statement said, Otuaro’s joy might not be unconnected with the fact that the Delta State Government needed to urgently come to the aid of NMU, Okerenkoko, through its agency, to address accommodation challenges occasioned by congestion of the Kurutie take-off site of the NMU, Okerenkoko.

The Managing Director of DESOPADEC, Bashorun Askia Ogieh, who led his team including Dr Paul Bebenimibo, member representing Ijaw on the board, to the inauguration ceremony, said “the facility is fully furnished for executive stay”, adding: “extra furnishing of the structure was facilitated by His Excellency, Deacon Kingsley Burutu Otuaro. The project was completed in record time but the commission, in a paradigm shift, is looking forward to executing projects within the budget year”.

Said Otuaro: “I’m excited to be part of this facility built by DESOPADEC and donated to NMU, Okerenkoko.

“As an indigene of Okerenkoko, I can tell you the relevance of this facility to the community and the NMU, Okerenkoko.”

The source added that Otuaro, who inspected the facility, commended the Board of DESOPADEC and the contractor for the good work executed in record time, appealing: “I hope DESOPADEC will execute projects in all oil producing communities”.

The Deputy Governor tasked the oil producing communities to deepen the prevailing good relationship with DESOPADEC to enable the intervention agency to do more.

On the entourage of the Deputy Governor was the Delta State Commissioner for Oil and Gas, Prince Emmanuel Amgbaduba, Member representing Warri South-West LGA in the Delta State House of Assembly and other top government functionaries.