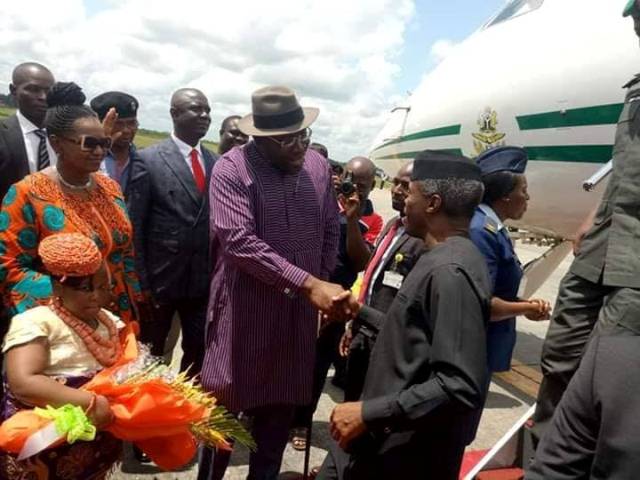 The Vice President, Prof. Yemi Osinbajo, on Friday described the flood that ravaged some communities in Bayelsa as a “monumental disaster.”

Osinbajo who spoke at the Internally Displaced People’s (IDP) camp, Igbogene, on the outskirt of Yenagoa, said his visit was to assess the extent of damage caused by the flood.

He said that he undertook an over-fly on a helicopter from the Port Harcourt International Airport through the flooded communities in Rivers and those within Yenagoa metropolis.

The vice president observed that the exercise had made him realise the degree of suffering the flood had thrown many of the victims into.

Osinbajo commended the National Emergency Management Agency (NEMA) and its state counterpart, (SEMA) for their efforts in assisting the flood victims.

He pledged the assistance of the Federal Government to resettle the victims and provide them means of livelihood to start life anew as soon as the flood was over.

He said his visit along with with the Director-General of NEMA and the Minister of Environment was to demonstrate the seriousness the federal government attached to the welfare of flood victims.

The vice president also assured the people that as soon as he returned to Abuja the federal government would “restrategise” and get back to the state.

Osinbajo further said that government was working on how to ensure that such emergency did not occur in future, by embarking on dredging of water channels and constructing canals.

He urged the people to avoid dumping solid wastes into water channels to aviod flooding.

The vice president pledged government would ensure that the babies delivered in the IDP camps were “perfectly and well cared for.”

Also speaking, Gov. Seriake Dickson, described Bayelsa as the most impacted state across the federation, saying the state is situated below sea level.

“You saw personally the extent of the devastation. This is the state mostly affected whenever there is flooding. This state is below sea level,” he said.

The governor said the state government was doing all it could to care for the displaced people.

According to him, apart from the 13 IDP camps already set up, additional three would be established to contain the increasing number of people displaced by flood.

He expressed readiness of the state government to collaborate with the federal government for long term solution to the problem of flooding in the state.

The governor lamented the insufficient quantity of relief materials supplied by NEMA.

Bayelsa APC jubilant as Lyon is appointed into the APC Committee as Vice Chairman,...

NNPC discloses that 19 pipelines were vandalized in March