Okowa: The coming of an authentic leader as Vice President

If there is any statement in recent time that had not only laid to rest the controversy but answered the question as to whether Senator (Dr) Ifeanyi Okowa, the Executive Governor Delta state, is an authentic leader or not, it is the recent declaration by the presidential candidate of the Peoples Democratic Party, Atiku Abubakar, who a few days ago picked him, as his running mate for the 2023 presidential election.

In his words; I made clear that my running mate would have the potential to succeed me at a moment’s notice, that is, a President-in-waiting. In other words, the person must have the qualities to be President. The person must have an appreciation of the deep rot which our country has been put into by the rudderless APC government; understands the great suffering that most of our people are going through and the urgency of relieving them of that suffering; understands the critical importance of economic growth and development to provide our young people with jobs, hope, and a pathway to wealth. The person must appreciate the critical importance of education in the development of modern societies so we can prepare our young people to be able to compete in the increasingly competitive and globalized world. He concluded.

ALSO READ: I picked Okowa because he has the qualities to be a president – Atiku

Of course Atiku going by commentaries was right in his analysis and clarification on Governor Okowa. His position was not only well understood but factually backed. As a serving governor, Governor Okowa has demonstrated in his state and through his conduct that governance is about service to the people and will not only add excitement to energized campaigns but will also help to bring focus, discipline and stability to government come 2023.

Besides, there exists also the need, to, at the very least appreciate other sterling qualities that more than anything else assists the Governor meet the requirements of an authentic leader.

Going by the words of Bill George, a Professor of management practice at Harvard University, authentic leaders demonstrate a passion for their purpose, practice their values consistently and lead with their hearts as well as their heads. They establish long-term relationships and have the self-discipline to get results. They know who they are.

Essentially, from possessing the above qualities, in addition to understanding the seriousness the current moment represents for our country and the future that our young people yearn for and deserves, flows the reasons why Governor Okowa’s coming as the Nation’s Vice President come 2023 will not only be rewarding but result-oriented.

First and very fundamental, there is a general discontent with the quality of governance, frustration and disappointment of the citizenry who feel betrayed by the All Progressive Congress (APC) led Federal Government elected into power, and anger, at the deplorable state of the nation.

In fact, Nigerians (students, businessmen, traders, investors, creative people and women among others) have in the last seven years learnt that the difference between good and bad government sometimes lies in the number of obstacles leaders can remove from the path of their citizens or put before them.

Take as an illustration, on the war against corruption and national re-orientation, the party’s manifesto going by reports says that “the APC in government will muster all its political will to wage a strident war against corruption to avoid disastrous post-oil-economy.” It highlighted the action plan to plug all the leakages which give room and accelerate corruption, recover looted funds and cap and trim unwarranted allowances to public office holders.

But these promises were never fulfilled.

This frustration, is in the opinion of this piece, further fed by the fact that at no time in ‘the chequered history of our beloved country have we been as divided as we are today or witnessed such magnitude of mistrust of ourselves and of our nation’. In fact, the nation has not only lost the capacity, sincerity and trustworthiness to negotiate and resolve contentious issues without resorting to violence. Rather, today, no nation best typifies a country in dire need of peace and social cohesion among her various sociopolitical groups than Nigeria as myriads of sociopolitical contradictions have conspired directly and indirectly to give the unenviable tag of a country in constant search of social harmony, justice, equity, equality, and peace.

Qualifying the above scenario as a crisis is the awareness that Nigeria is blessed with plenty politicians/leaders, more than it really needs, but the present administration at the centre lacks creative managers of resources (human material and human) who can lead the nation out of the constant crisis or possess political will to engage as policymakers best minds to help get the answers and deploy the resources we need to move into the future.

The above failings and failures on the Federal Government part has made the need for Alhaji Atiku Abubakar and Senator (Dr) Ifeanyi Okowa’s joint ticket in the forthcoming 2023 presidential election on the platform of the Peoples Democratic Party (PDP) not only necessary and welcoming, but eminently desirable.

From his enormous experience in the public leadership sphere as the Executive Governor of Delta state, Okowa is aware that presently, Nigerians’ need for lengthy speeches, statements and eloquent words is far less important than their need for people who can build airports, ports, companies, factories and other growth-generating ventures. He is aware that good management requires a capable manager and if allowed, will end both the galloping unemployment and underemployment situation in the country which, going by the latest report from the Nigerian Bureau of Statistics (NBS) , stands at frightening 33%. He is capped with required managerial skills capable of mobilizing the resources needed to reach specific targets within a defined time frame.

As stated in my recent intervention, Governor Okowa’s antecedents in the last seven years as a state governor, indicates that in the areas of infrastructure development/deployment, education and healthcare delivery, the Governor has done exceedingly well.

Atiku seems to understand as well as appreciate this fact when he stated thus; my running Mate will help to lead the party to victory next year not only in the Presidential election but also in the governorship and legislative elections. And will be by my side as I work hard every day to provide our people with security, revive our economy, improve education and unite our country. He has both Legislative and Executive experiences.

This piece holds the opinion that Governor Okowa’s coming as Vice President will for example, not only devote substantial resources, time and energy to build a knowledge-based economy and a critical mass of skills for entrepreneurship and business competitiveness as demonstrated in the last seven years of being in the saddle as the Delta state Governor. But address in sustainable/concrete terms the nagging challenge of the Niger Delta region, a region where communal rights to a clean environment and access to clean water supplies is being violated in the Niger Delta. Where the oil industry has, by its admission, abandoned thousands of polluted sites in the region which needs to be identified and studied in detail. Aquifers and other water supply sources which are being adversely affected by industrial or other activities need to be recovered while communities are adequately compensated for their losses.

Most importantly, similar to what he demonstrated in Delta state, Okowa’s Vice Presidency will aid Mr. President when elected, to give infrastructural development the attention that it deserves without taking human capital development for granted. He evidently recognizes that greater capacity makes it possible to get more done in less time at a higher level of engagement and with more sustainability.

Utomi is the Program Coordinator (Media and Politics), Advocacy for Social and Economic Justice (SEJA), Lagos. It could be reached via 08032725374 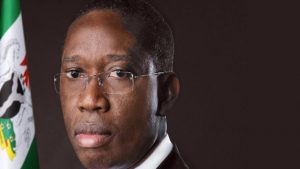