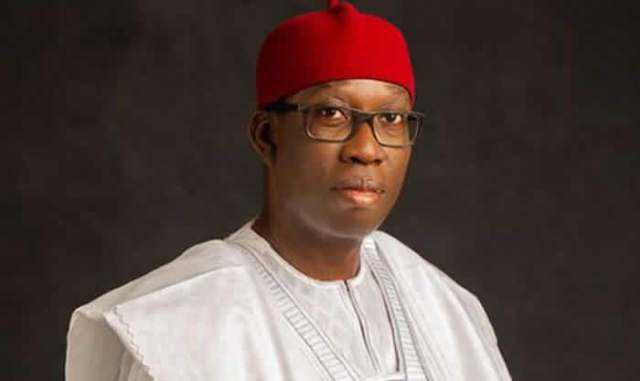 It made this known on Monday, August 19, through the state Commissioner For Works, Chief James Augoye.

Augoye said in Asaba that the Governor Ifeanyi Okowa government would dredge the Anwai, Iyiabi and Amilimocha River to accommodate floodwater from the storm drainage that is being constructed.

He divulged the government’s commitment to build roads that would stand the test of time, while appealing to the people of Asaba-Ase who protested on Saturday.

The commissioner said State government has not demobilized from its various construction sites despite the rains and high level of water in riverine areas.

It was gathered that the people had protested against the alleged abandonment of the 7 kilometers Abari-Asaba-Ase road project.

But Augoye reiterated that construction of concrete drains was steadily going on at the various road projects across the state, adding that most of the projects that were slowed down due to rains, would come alive as dry season sets in.

Augoye who was flanked by his Information counterpart, Mr Charles Aniagwu and the Chief Press Secretary to the Governor, Mr Olisa Ifeajika, said, “We are not just relaxing, we are not slowing down civil works on the projects, as soon as the rains are over, there will be massive construction of road projects across the state.”

He, however, said that the state government received part of the money spent on the Asaba-Ughelli federal road after it took the matter to the National Assembly.

Augoye said the State Governor, Okowa was talking with the Niger Delta Development Commission, NDDC, to build a flyover and pedestrian bridge across Koka junction so as to reduce the gridlock.

He said contract for the construction of pedestrian crossing the Asaba-Benin expressway at Summit junction and Abraka area of the state capital, has been awarded.

Niger Delta: PIND fingers unemployment to cause of youth restiveness

Schools resume in 25 LGAs in Delta