Niger Delta billionaire businessman, Mr Jimmy Ogida, has announced the burial arrangement of his late mother, Mrs Yellow Asekuku Ogida, who died on Saturday, August 6, 2021 at the age of 75 years.

The oil and gas magnate, who is the CEO/Chairman, Jimco Global Concepts Limited, announced this in a statement he issued to GbaramatuVoice on Sunday that his mother would be buried on Friday, December 9, 2022 in Gbaramatu Kingdom, Delta state.

The planned burial which will take a cannibal-like posture is expected to attract to the region high profiled dignities from within and outside the country, captains of industries, Chief Executives of International Oil Companies (IOCs) operating in the country, policy makers, public office holders in the state and federal levels and traditional rulers, revered men of God, among others. 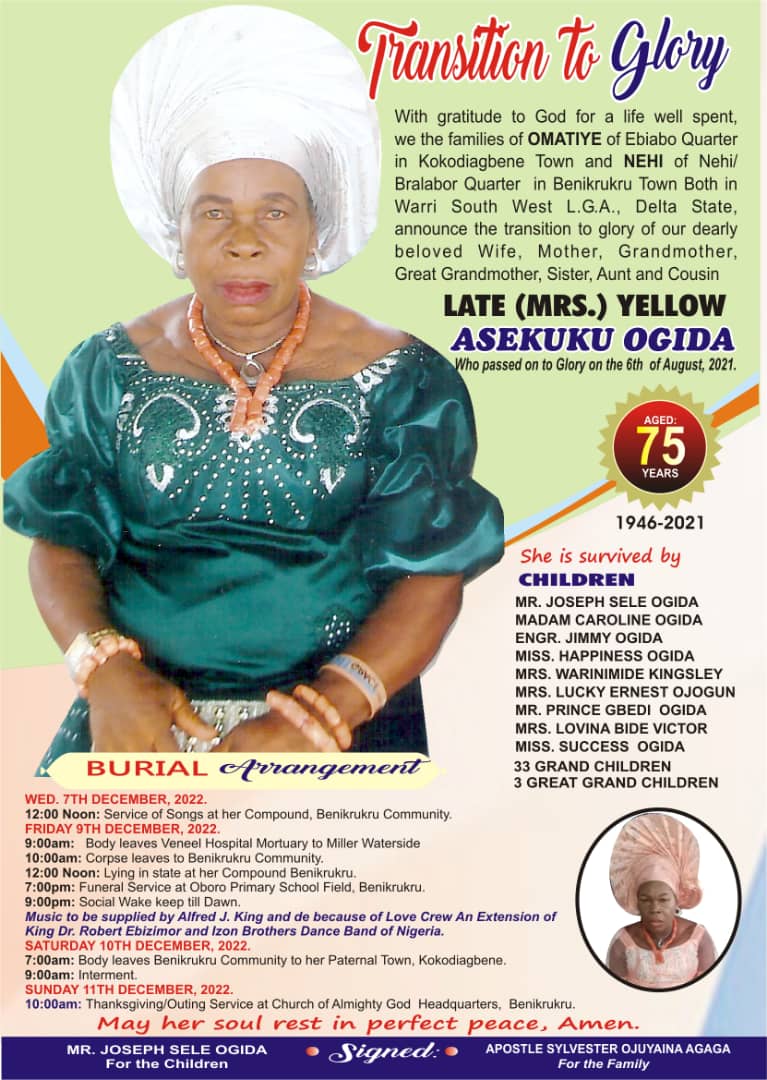 The statement partly read: “with gratitude to God for a life well spent, we the families of OMATIYE of Ebiabo Quarter in Kokodiagbene Town and NEHI of Nehi/Bralabor Quarter in Benikruku Town Both in Warri South West L.G.A, Delta State, announce the burial arrangement of our dearly beloved wife, mother, grandmother, great grandmother, sister, aunt and cousin.”

Giving details, the family stated that a Service of songs will be held on Wednesday, December 7, 2022, by 12noon, at her compound in Benikruku Community.

Also, on Friday, December 9, 2022, by 9:00 am, the body will depart venell Hospital Mortuary, Warri, Delta state, to Miller Waterside for onward movement to Benikruku Community by 10. am.

It also stated that by 12:00Noon there will be lying in state at her Compound Benikruku while Funeral Service will begin by 7.pm at Oboro Primary School Field, Benikruku. This will be followed by a social wake keep scheduled from 9 pm to Dawn.

According to the statement, music will be supplied by Alfred J.King and De Because of Love Crew, an Extension of King Dr Robert Ebizimor and Izon Brothers Dance Band of Nigeria.

Also, on Saturday, December 10, 2022, by 7:00am, body will depart Benikruku Community to her Paternal Town, Kokodiagbene where Interment will hold by 9am.

Ogida, describing his late mother stated that she was a virtuous woman known in the whole Benikruku Community and its environ, Warri West Local Government Area of Delta state, for her “resilience and her “staunch acceptance of reality”.

The oil mogul described his late mother as a teacher and one with a lovable personality.