A political pressure group in Delta state, the Independent Grassroots Liberators (IGL), has asked the Senator Ifeanyi Okowa’s led Delta State Government to immediately settle the communal disputes in the warring communities of Ogbe-Ijoh and Aladja or else, they should not contemplate coming to the area for political campaign or other political gains in the forthcoming general election in the country slated for February 2023.

Aladja is an Urhobo community in Udu Local Government Area, while Ogbe-Ijoh as its name implies belongs to the Ijaw ethnic nationally and doubles as the administrative headquarters of Warri South-West Local Government Area of Delta state. The two communities have been enmeshed in a boundary dispute that has lingered for decades.

GbaramatuVoice had earlier reported that though the communities recently signed a peace accord, yet, there is no truce in sight 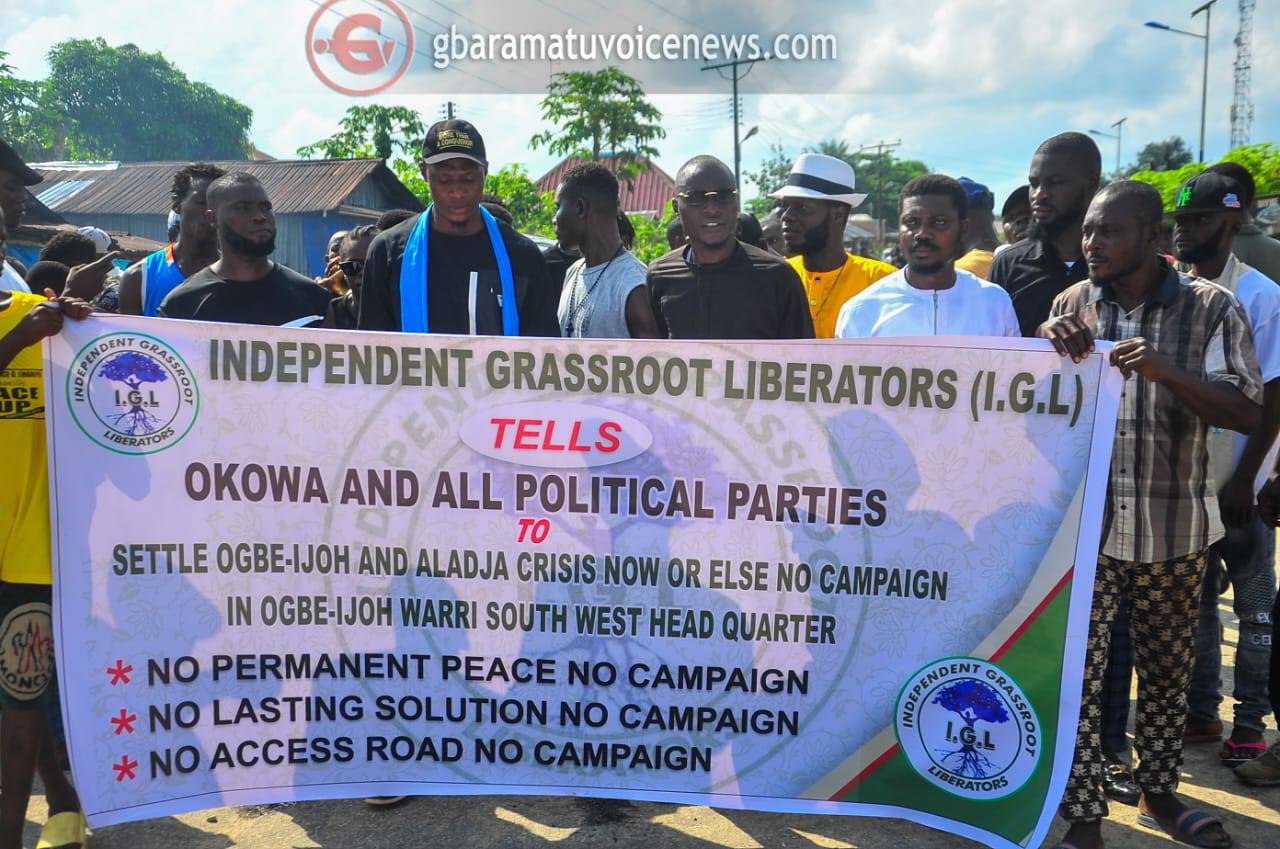 Speaking at the margin of a peaceful protest held on Friday, November 18, 2022, at Ogbe Ijoh to register their displeasure over the protracted crisis, the National President of the Independent GrassRoots Liberators (IGL), Amb. Mamamu Bene Youkore, tasked the Delta State Government to resolve the issue immediately or should not contemplate coming to the area for electoral campaigns.

On Governor Okowa’s lack of political will to settle the dispute, Youkore said: “My message to His Excellency, Sen. (Dr) Ifeanyi Arthur Okowa, the Governor Of Delta State and the Vice Presidential candidate of People’s Democratic Party (PDP), we want you to settle Ogbe-Ijoh/Aladja case before any campaign and political activities in the community and we want to send a message to our brothers in our neighbouring community Aladja that, peace is the best as war cannot bring about anything good.

While noting that the peace accord signed by the two communities has since been bridged and called on the government to send in the military troops for peace to reign in the communities, the Ijaw born Comrade appealed to everyone in the kingdom to embrace peace.

“We want to live in unity as we have been living before, We don’t want to be killing ourselves anymore. We have come to the sudden realization that politicians are using us for their selfish political gains and purposes,” he concluded.

On his part, the National Secretary Of Independent GrassRoots Liberators, Engr. Smart, Okosu, while speaking with GbaramatuVoice stated that the administration of Gov. Okowa has failed the Ogbe-Ijoh people. He berated Okowa for his lack of political will and lackadaisical attitude to the crisis.

Okosu said: “Seven (7) years ago, Okowa came here and promised us that he will settle this dispute. The disputed land is over 289,00 acres. Despite the promise, the Governor has failed to achieve that aim seven years after the promise was made.

Continuing, he said; “They want to start another round of political campaign and we stand to say no to any political activities in the headquarters of Warri South West until the government, incoming president, and vice president, come down and fulfill all the promises he made to the good people of Ogbe Ijoh kingdom. Until that is done, we will allow the campaign activities.”

In a related development, Kenneth Ebikoro, the Youth President of Ogbe-Ijoh Warri Kingdom, while speaking with GbaramatuVoice lamented that many persons have lost their lives since the beginning of the crisis and he called on the state government to settle the conflict as the youths who intend to cast their votes won’t be voting if the conflict is not resolved.

Similarly, Comrade Boro Ebikake, the Group’s publicity Secretary, called on the state and federal government to come to their aid as they are losing their brothers and sisters to the crisis, noting that the crisis has caused alot of pains to families and they are no longer happy.

Jane Oromoni, a member of the group in the same vein stated that the conflict has killed many persons and the communities have had enough of the carnage.