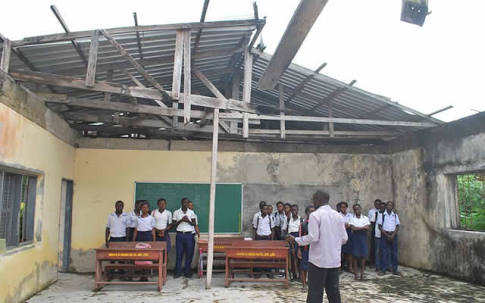 As difficult as it may sound, there are still some communities in Nigeria, especially those that are located in the creeks of the Niger Delta region, that are yet to benefit from quality, basic and affordable education. In fact, these sets of Nigerians continually beg to be educated or for educational infrastructures to be established in their domains.

While it is the duty of every responsible government to strive to ensure its citizens are educated so that they would in return contribute physically to the collective development and growth of the nation, it is sad to say that, the Nigerian government (federal, state and local) by their actions, seems to be playing an opposite role or are sailing in the wrong direction. This is as a result of the lack of commitment shown by the government at all levels towards the educational plight of those who are attending schools in the creeks of the Niger Delta.

For those in the creeks, their challenges ranges from the lack of basic educational infrastructures such as well-equipped classroom blocks, learning aids, to the dearth of teachers who are never on ground but are constantly receiving salaries. All of these have shown that the government does not place any value for those residing in the creeks, popularly referred to as riverine communities that are scattered across the coastal states of Bayelsa, Cross River, Delta, Edo, Ondo, and Rivers.

Recall that the United Nations (UN) Universal Declaration of Human Rights, adopted in 1948, is the first international legal instrument that recognizes education as a human right. By that declaration, it is the sole responsibility of the government to ensure that every child, irrespective of where they reside, be it in the creeks of the delta or in the desert, have the sole right to standard quality basic education at all times.

Many a times, those living in the creeks have cried out to the relevant authorities of government to come to their aids in terms of providing and sustaining education in their domains. To show the level of their seriousness, some of the communities have taken the pains to employ private teachers to teach in government schools; some communities have even built classroom blocks in partnership with other relevant stakeholders in the region to help reduce the dilapidated state of educational infrastructures in the creeks, and so on and so forth.

Rather than government to appreciate these laudable efforts taken by the people, it chooses occasionally to turn a blind eye and deaf ear to them. For instance, on teachers who fail to resume at the schools of their postings, some community members volunteered to take up teaching jobs on behalf of the government teachers. But rather than the government compensating them by directly employing and training such volunteers, it does nothing except not recognizing them as qualified teachers.

In another instance, the dearth of teachers has always been blamed on the absence of basic infrastructures such as accommodation, transport allowances, medical facilities, etc. And so, while some of the communities have taken the initiatives to build well equipped accommodation for teachers as well as provide transport grants to help assist them, yet, some of the teachers are nowhere to be found. Rather than the government taking a bold step to remedy some of these challenges, it chooses to remain silent in offering solutions to them.

The same area that the government failed to attract meaningful developments to is the same location it earns majority of its vast revenues from in the oil and gas industry. If oil companies are operating in the riverine terrains and are eager to go there to carry out their field operations, why isn’t the government making moves to ensure that where its treasure is, that is where its heart lies also, by instigating meaningful infrastructural development, especially education?

According to Nelson Mandela, “Education is the most powerful weapon which you can use to change the world,” And so, if the people of a place gladly embrace education and are fighting for it, it should be an opportunity for the government of such a people to tap into this for the positive advancement of their immediate societies and the nation at large. More specifically so when the Niger Delta region is a hotbed of violence, blamed largely on ignorance and the lack of education. Or doesn’t the government know that through education it could end violence in the region, stop the effects of oil bunkering, empower the people to not be cheated by oil companies and their cronies, reduce the levels of illiteracy as well as create opportunities for self-empowerments?

Where a people continuously beg for education and the government continuously turns a deaf ear, then it is obvious that it is only creating a platform for ignorance to thrive at the expense of peace and positive advancements. This would in return cost the government much in terms of it spending more on security with the loss of revenues from investors who are likely to relocate from a violent zone.

It is therefore good for the government to reverse this trend of not paying attention to basic education in the creeks. Doing so would to a large extent reduce the agitations coming from those in the creeks. It would also make the people to stop seeing the government as their enemy but instead as a partner and friend, who not only care about oil revenues but is also looking out for their best interest.

The government should as a matter of urgency see riverine communities as special areas deserving special attention and treatment. In this regard, a special budget should be created to take care of the various educational challenges and to provide for other basic infrastructural amenities that will make life more meaningful for those in the creeks.

It is my utmost belief that if the government would change the narrative of riverine communities by embarking on the above proffered solutions, I am quite sure that most of the ugly scenarios playing out in the region would be finally laid to rest.

Dickson condemns those opposed to nomination of Akinkugbe

NDDC N70.4bn Scandal: Any person indicted must be brought to book...

What laws would Lawan promote as President of 9th Senate?