Commodore Omatseye Oritseweyinmi Nesiama was born in Sapele, Delta State. He undertook his early education in Delta State attending the prestigious Government College Ughelli. He began his military career at the Nigerian Naval College, Onne, as a member of the 5th Regular Combatant Course in June, 1984.

He graduated as a Counter-Terrorism Fellow from the George C Marshall Institute for International and Security Studies, Germany in 2007. To cap his military education, he attended the prestigious PLA National Defence University, Beijing, China where he graduated with distinction in Defence and Strategic Studies in 2012.

In his quest for further enhancement in the civil management field, Commodore Nesiama obtained a Diploma in Sports Management with distinction at the National Institute for Sports, Lagos in 2001, a Post Graduate Diploma in Shipping Management in 2007 as well as a Masters Degree in Transport Management from the Ladoke Akintola University of Technology, Ogbomoso, Oyo State in 2009.

Commodore Omatseye Nesiama is a highly resourceful personality with commendable organizational ability. He applies good tact with deliberate thought processes and good initiative to achieve desired results. He has a strong drive for success, which he has applied to rendering top-notch performances in his varied areas of call. He is a proponent of Strategic Thinking, a philosophy he gained while studying in China.

Commodore Nesiama got commissioned as a Sub Lieutenant in 1988, promoted Lieutenant in 1992, Lieutenant Commander in 1997, Commander in 2002, Captain in 2007 and Commodore in 2012. He held several appointments while in the service.
These include: Watch Keeping duties onboard various Nigerian Navy Ships, Staff Officer, Commanding Officer and Director at single and tri-Service levels at various strata of his military career.

Other positions held are: Commander, Nigerian Navy Intelligence Annex, Lagos, Deputy Director Naval Transformation and Director of Physical Training and Sports at the Naval Headquarters, Abuja. He was also Command Ashore and Sea Training Officer at the Naval Training Command, Apapa before retiring honourably from Service in 2016.

Commodore Nesiama is one of those privileged to be connected by birth to Jakpa as an Uwangue-Ologbotsere decendant, Gbaramatu as a Leigbene-Arifa decendant and Umolo-Olomu as an Omotukoli decendant. He is known to have associated very closely and shown uncommon loyalty to friendship while supporting many of his Isoko allies to achieve enviable military, sports and political leadership positions.

Commodore Nesiama served as Chief Security Officer to the Military Administrator of Enugu State, Aide de Camp (ADC) to Military Administrator of Abia State and General Staff Officer to the Honourable Minister of State for Defence and later to the Honourable Minister of Defence. He was member of the State Security Councils of Enugu and Abia States at different times.

Commodore Nesiama was quite innovative while in and out of service in the Nigerian Navy.

He led the initial ECOMOG landing operation, which provided required intelligence that enabled the ECOMOG forces take-over of the strategic Liberian Port of Buchanan from the Charles Taylor rebel forces in April 1993.
He chaired the committee that developed new concepts and curricula for all the 11 professional training colleges and schools in the Nigerian Navy. His leadership effort was laudable especially considering the fact that this novel task had never been previously undertaken.

He designed and produced a Training Record Book for seafarers in line with the International Maritime Organisation (IMO) Standard for Training Certification and Watch keeping for seafarers (STCW) convention which got the Navy approval for use by the Midshipmen in the Fleet till date.
He is a recipient of the Delta State Heritage Award for Outstanding Leadership.

He is the first Nigerian to pass the prerequisite examinations to qualify as an International Association of Athletics Federations (IAAF) Licenced Athlete Manager.

He is the second Nigerian ever to pass the requisite examinations that qualify to be appointed into the Confederation of African Athletics (CAA) International Technical Officials (ITO) Panel for competition management in Africa.

As Technical Director of the Athletics Federation of Nigeria, he set up an actionable strategic road map for an enhanced athletics performance for Nigerian athletes.

Some of these achievements are evidenced by the following: Chief of the Naval Staff’s Commendation in 2016, for Leading the Navy’s effort at reviewing the training curriculum of the 11 Nigerian Navy’s professional colleges and schools.

Ministerial Commendations for Excellence in Sports Management in 2013 and 2015 for his viable contributions as Nigeria’s Athletics Technical Director where he led National Athletics teams to the successes recorded in the African and World Championships 2013 and Commonwealth Games 2014.

Ministerial commendation for sterling performances and exemplary character displayed in the military field in 2007.

Enugu State Government Commendation for initiating and executing the plan to eliminate ghost workers from the State’s Civil Service in 1994. 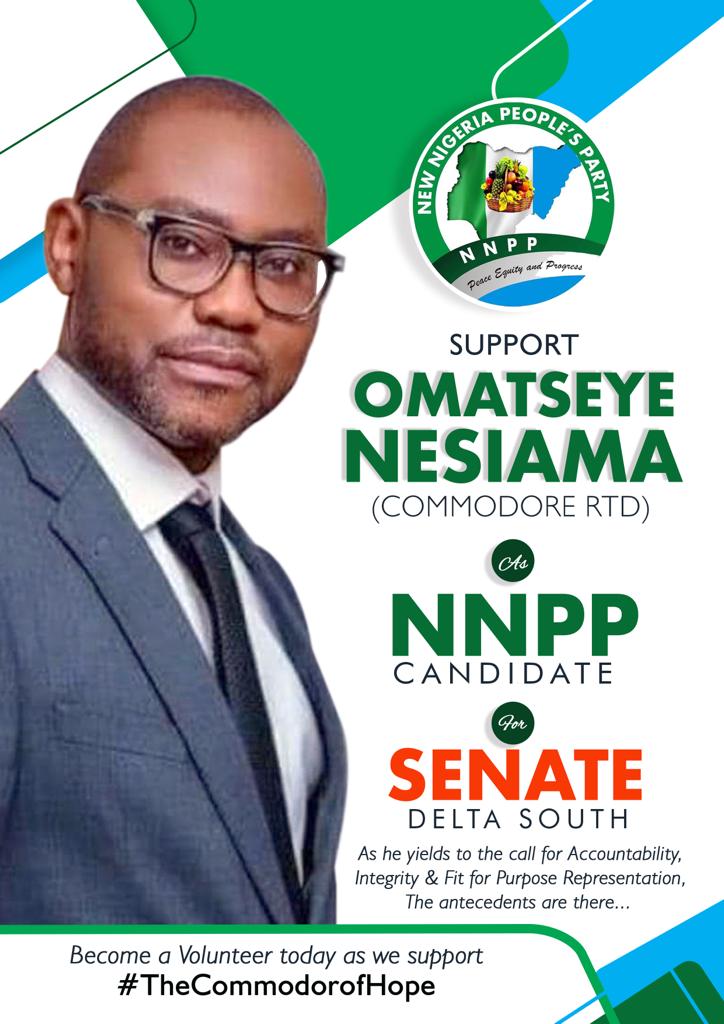 Credited with the accolade of establishing a Code of Conduct and Ethics for athletes, officials, family members and spectators involved in the business of athletics in Nigeria.

Commodore Nesiama is married to Mrs Roli Nesiama and blessed with children. His hobbies include listening to country gospel music, participation in sporting activities, travelling, reading and nature observation.

Commodore Nesiama, after retirement, has been involved in a lot of mentoring and life’s coaching of young persons and adults. He utilizes opportunities presented through platforms presented by the church, businesses and even sports to carry out his mentorship and role-modelling activities. He strongly advocates for creation of avenues for the youths to gain meaningful engagements.

Commodore Omatseye Nesiama is a visionary, selfless and result-oriented personality. He exhibits utmost discipline, dedication, commitment and doggedness in the pursuit of his goals. The retired senior naval officer employs his personal attributes to motivate his subordinates towards achieving set objectives. He has set enviable standards of excellence in any known area that he has been tasked both in and outside of the military service. In his entire tasks, he has demonstrated core competences, the hallmark of a robust personality. He has proven himself to be a very reliable leader with capacity to undertake highly demanding and challenging tasks.