Anambra and Kogi States may have finally joined the league of Oil Producing States in Nigeria as their oil wells have been recognised by the Revenue Mobilisation Allocation And Fiscal Commission.

The development was sequel to a letter from RMAFC to a request by Alhaji Yahaya Bello for due share of revenue accruing to the nation from oil and gas production activities in Kogi State. 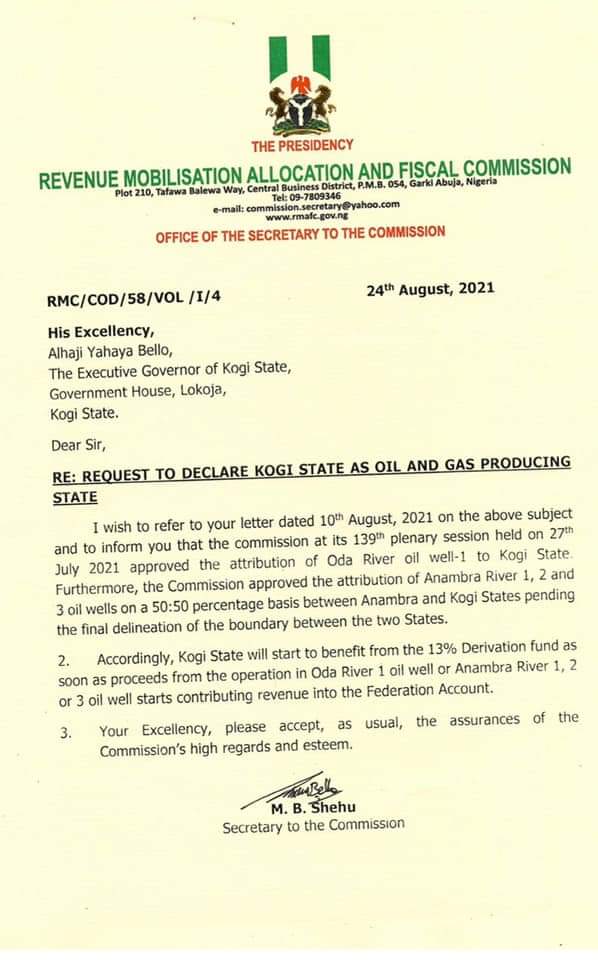 In the letter sighted by the Economic Confidential, the states would also benefit from the 13 per cent Derivation Fund once the proceeds from the oil wells are contributed to the Federation Account.

In the approval letter signed by RMAFC’s secretary, M.B. Shehu, and addressed to Obiano, the Commission approved the attribution of 11 oil wells wholly to Anambra State.

The Commission also approved attribution of Anambra River One, Two and Three oil wells to be shared on on per cent basis each between Anambra and Kogi States pending the final delineation of boundaries of the two states.

Meanwhile, the Commission insisted that for the states to benefit from the 13 per cent Derivation Fund, the proceeds from the operations of the oil wells should be contributed to the Federation Account.

The Economic Confidential gathered that the oil wells in Anambra and Kogi States are not producing at the moment.