The leader of Warri South West Local Government Area of Delta State, Rt. Hon. Emiko Odin Etuwewe, has been impeached by members of the legislative council.

The impeached leader was accused of alleged incompetence, breach of trust, abuse of office, and gross misconduct at their sitting on Monday, July 18, 2022.

GbaramatuVoice gathered that Emiko was impeached at the council’s plenary, when a member of the House, Rt. Hon. Raymond Pira, moved a motion of “Vote of No Confidence” on the leader.

The motion was said to have been seconded by Hon. Jeffrey Oromoni, and was immediately accepted and signed by fourteen (15) out of the twenty (20) Councillors of the Legislature fulfilling the mandatory 2/3 majority.

The new house leader, Rt. Hon. Raymond Pira was immediately elected by the house and subsequently sworn in by the Clerk of the Legislature, Mrs. Maureen Owei, after being nominated by Hon. Emmanuel Juweigha (Oporoza Ward) and seconded by Hon. Austine Arayei Esigbemi from Ward 9.

Meanwhile, the house has also suspended the impeached leader of the house, Hon. Etuwewe, for one month.

Efforts made to reach the House Leader on the matter failed as of the time of filing this report.

See the fifteen (15) councilors that endorsed the impeachment and were present at the sitting below: 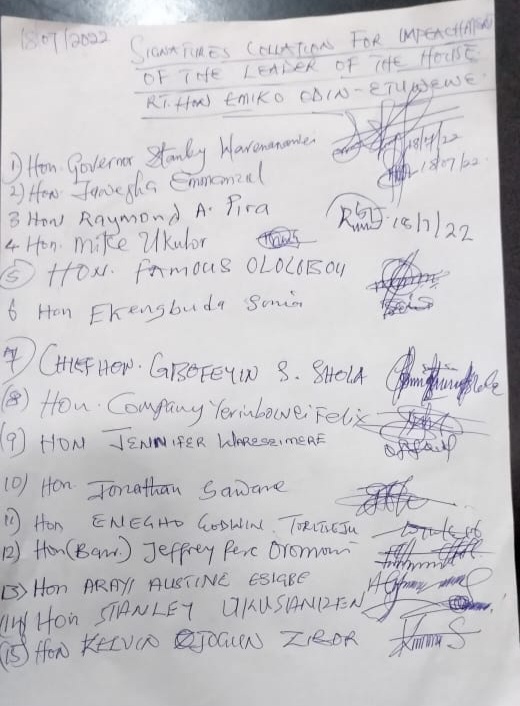