The  Ijaw Youth Council (IYC) Worldwide has called on President Muhammadu Buhari to halt the proposed ‘Operation Octopusgrip’ by the Nigerian Navy in the Niger Delta.

Barr. Pereotubo Oweilaemi led IYC made the call on Tuesday in a statement made available to journalists in the region.

The IYC President wondered that instead of the Federal Government to consolidate on the existing peace and tranquillity in the once-volatile region, it was rather fuelling aggression and fear among the people, especially those in the creeks.

“The Navy should stop its belligerent ‘Operation Octopus grip.’ Already, many riverine communities have deserted their homes for fear of invasion like what the army has done,” he alleged.

According to Oweilaemi, “the military drill, code named: ‘Operation Octopusgrip’ declared by the Nigerian Navy in the region where it deployed several warships and armoured gunboats to the creeks is tantamount to a declaration of war against peaceful and law-abiding citizens of Nigeria.

“The injury of the Nigerian army’s version of the military drill has inflicted on the Ijaw people through its belligerent Operation Crocodile Smile 11 has given us eternal scare of war.

“We make bold to say that the army has achieved no success in its recent bellicosity in the Niger Delta otherwise known as Operation Crocodile Smile 11 other than committing war crimes against the Ajakurama people.

“It only succeeded in using Ijaw people to test the mighty of its newly acquired weaponry.

“There is no gain whatsoever to the people from the so-called military drills.

“With the deployments of warships and armoured gunboats to the creeks of Niger Delta at a time the government is consolidating on the peace we are enjoying in the region shows that the military is looking for ways to cause another crisis in the oil industry.

“We are forced to believe that some persons are benefiting from the crisis in the Niger Delta and as such they don’t want it to end.

“Why the Nigerian Navy decided to waste our scarce resources in such a fruitless adventure like what the army has done?

“We have been saying time without number that the money to be used in such meaningless and illicit adventures which we know will only end up in private pockets should be channelled to the developmental projects in the region.

“The government is in dire need of money to carry out its programmes in the region.

“Even the N2b initial grant to the Maritime University at Okerenkoko for the school to commence academic activities in October last month has not been released.

“If the military has so much money to waste, why can’t it assist the Government in carrying out those projects?

“No amount of military drill, siege or invasion even if it amounts to genocide can bring peace to the Niger Delta. They can only help to escalate it which may consume the entire country.

“The only solution for peace in the region is development and an equity participation of the people in the management of the petroleum resources.

“The military should consider itself as a peace ambassador and participate in the ongoing peace process.

“You can’t demand for peace in an atmosphere of aggression, subjugation, annihilation and annexation of the people’s rights to life through the so-called military drills.

“We will resist it even with the last drop of our blood. President Buhari should call the military to order. What it is doing in the Niger Delta is an invitation to anarchy.

“There is nowhere in the world this practice should be celebrated where military destroys peaceful and law-abiding communities with some flimsy and irresponsible excuses.

“It is a common belief that war begets war and it does no good to mankind.

“Nigerians should rather think of how we can unite ourselves other than cause friction among us which will lead to conflagration,” he warned. 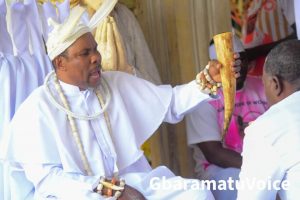