The former regent of Ijaw-Apoiland, Princess Joyce Ibimidun Adesola Oladiran-Ebiseni, on Sunday 12 March 2018 at Igbekebo in Ese-Odo Local Government Area of Ondo state, has appealed to the Ijaw nation not to neglect the Apois but to see Apoiland as a clan.

She made this statement in a chat with GbaramatuVoice correspondent at the coronation ceremony of His Royal Majesty, Oba (Professor) Sunday Adejimola Amuseghan, Lawe II, the Kalasuwe of Apoiland, who was successfully crowned as the 15th Pere of Apoiland.

According to the former regent, who could not hide her excitement during the historic event said it was her dream to not only enthrone a new king but one who would believe in the Ijaw struggle and would therefore correct all the anomalies in the kingdom.

In her words, “I am over excited and happy. We are making history today and we give God Almighty the glory that we are able to do a successful handing over. From regency to the throne, we have been able to crowned a king, a professor at that matter, on the throne of Kalasuwe of Apoiland.

“I want to appeal to Ijaw nation that they should keep on supporting us because of the Yoruba thing that has been on for a long period that is why we have been trying to enthrone a king that believes in Ijaw affair. With him on board a lot of anomalies that are now, I’m sure he is going to correct it; I’m sure he is going to put Apoi nation where it belongs in the Ijaw nation.”

When GbaramatuVoice correspondent inquired of her experience as a former regent being of the opposite gender, she said though it was not an easy task but with God by her side everything went well.

“I have been a regent for seven years, since March 2011. It wasn’t easy to rule in a male dominated environment most especially. Either we speak Yoruba today or not, that Ijaw thing is still in us. You know in Ijaw land, it is a taboo for a woman to be on the throne but somehow it happened. And to the glory of God, initially it was somehow, but later people keyed into it and started to give me the recognition and respect, and it worked well. But like I said earlier it wasn’t all that easy but within a year and so we got it all right.”

She appreciated leaders of the Ijaw nation and other high personalities who have always be there for the Apoi kingdom.

Also speaking to GbaramatuVoice correspondent, one of the youth leader of Apoi Kingdom, Mr. Emmanuel said Apoi people have for long been expecting such a day and that they would support the Kalasuwe to take the kingdom to the next level.

“I want to appreciate God because we have been looking unto God, that our problem in this state that we are, as Apoi, we are lack of this crown. But we prayed to the Almighty God and He answered our prayer.

“All the youths, we felt bad that nine years we did not have someone on the throne of Kalasuwe. It’s even a shame to all Apois that is why we put our heads together that we must find a way to push this thing and recover this thing back to our throne.

“And I thank God today that Kalasuwe is on the throne and I believe all the youths of Apoi under Apoi Youth Council (AYC) will support the crown and we are going to support all Ijaw nation to be and we will make sure that we give the Kalasuwe support to lead Apoi successful to the great kingdom in Jesus name, Amen.” 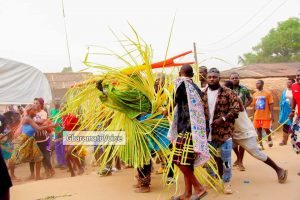