All is set for the 8th edition of PEACE LEGEND AWARD in Warri, Delta State as the IJAW NATION’s 50 legends will be giving accolades.

The Founder of Peace Legend Award Nigeria and the Project director, Mr. Jesse Amiri, while addressing journalists on Thursday, May 27, 2021 in Warri, Delta State noted that this year edition will be bigger and better. 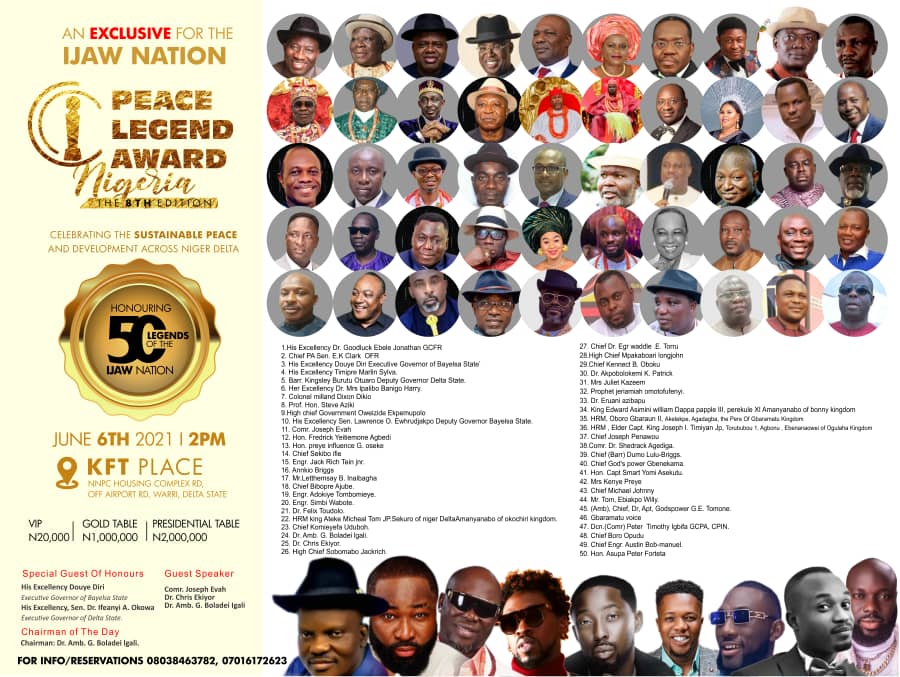 “We started the event some years back, this is 8th edition and improvement had be recorded in every other editions. There is no doubt this year edition will be bigger and better.” Jesse said

The timely event that will be hosted by the popular comedian, Ushbebe is exclusively aimed at celebrating Ijaw legends that have great landmarks in humanitarian services and it is a brain child of Peace Legend Award Nigeria.

The Special Guests of Honour for the event are Governors of Delta and Bayelsa states, Dr. Ifeanyi Okowa and Sen. Douye Diri. While the chief host is Barr. Kingsley Otuaro, Deputy Governor Delta State.

The event that is themed; Celebrating Sustainable Peace and Development Across The Niger Delta has Dr. Godknows Boladei lgali as its Chairman with Comrade Joseph Evah, Dr. Chris Ekiyor and Dr. Amb. G. Boladei Igali as Guest Speakers.

Other nominees selected by a panel of experts are as follows:

Meanwhile, GbaramatuVoice will be receiving for the 5th time, the Niger Delta Best Newspaper of the Year.