GbaramatuVoice 7 years of robust journalism and lessons to draw

Recently, precisely on Monday August 23, 2022, the GbaramatuVoice newspaper, in what has become an annual ritual of the sort, announced for the awareness of the general public, details of programmes lined up to mark its forthcoming 7th Anniversary Lecture/Awards, Scheduled for Tuesday August 30, 2021, by 10:00am, at the Transcorp Hilton Hotel, Federal Capital Territory (FCT), Abuja.

Also in that release, the News organization told the world that the anniversary lectures which has as a central theme: Oil politics, securing national assets, dependency and diversification, will have as Keynote Speaker, His Excellency, Chief Timipre Sylva, and Honorable Minister of State for Petroleum Resources while Prince Adewole Adebayo, 2023 Social Democratic Party, SDP, Presidential Candidate will Chair the event, His Excellency Barr. Kingsley Burutu Otuaro , Deputy Governor of Delta State will be the Chief Host. The Special Guests of Honour expected at the event are; His Excellency, Senator Douye Diri, Executive Governor of Bayelsa State, His Excellency, Dr. Samuel Ortom, Executive Governor of Benue State, Mallam Mele Kyari, Group Chief Executive Officer, Nigerian National Petroleum Company (NNPC) Limited, among other dignitaries made up of Nigerians and Non Nigerians and drawn from different sectors of human endeavors. 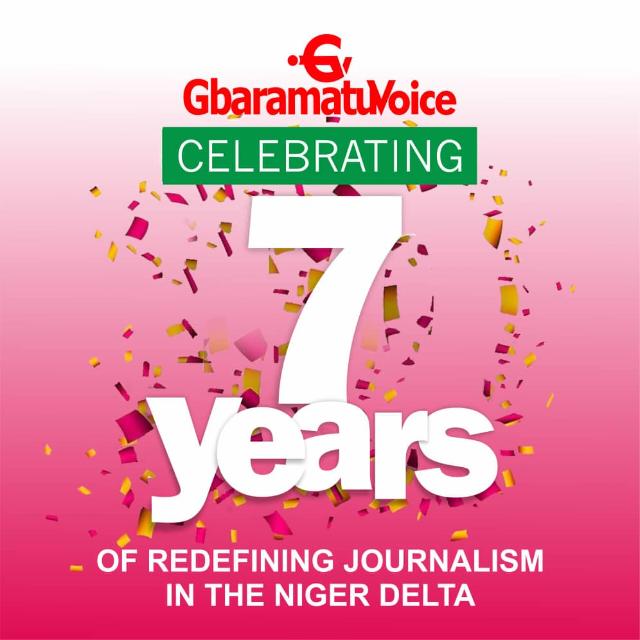 Indeed, while this preliminary information is relevant to the present discourse, there exist even more serious lessons to draw, and reasons that qualify the 7th Anniversary lecture and award celebration as historic, and GbaramatuVoice Newspaper as a colossus in the nation’s media sector.

First and very fundamental, though established in August 2015, as a regional newspaper, to among other responsibilities bridge information gaps between Niger Delta communities and the rest of the world, the newspaper to the admiration of all now shoulders an even more significant responsibility as it continues to use the anniversary lecture which usually centres on critical new research to address all spectra of national concerns including but not limited to politics, good governance, democracy and the oil and gas industry.

Taken as an illustration, the GbaramotuVoice annual lecture has a rich history of promoting national unity, recognizing the good works of various individuals that have positively imprinted their names in various areas of human endeavors while contributing to the life chances of humanity.

Again, as a media organization that exists in a volatile Niger Delta region, the GbaramatuVoice has assisted in inculcating and reinforcing positive political, cultural, social attitudes among the citizenry and created a mood in which people become keen to acquire skills and disciplines of developed nations.

As to promoting the nation’s democracy, the newspaper recognizes that the role of the media in every evolving democratic society like ours is almost holy; and has served as a forum for the people to express themselves and their opinions. The publisher personally believes that the viability of democracy depends upon openness, reliability, appropriateness, responsiveness, and a two-way nature of the communication environment; that democracy depends upon the regular sending and the receiving of objective signals.

As a principle, the Newspaper believes that ‘every decision a journalist makes when gathering, organizing and presenting the news requires a value judgment. Different decisions bring different results. All decisions have consequences that are direct and indirect, intended and unintended, short term and long term. And journalist’s decisions affect others; those decisions may influence thousands of people’s opinions on a political issue’.

While the Newspaper celebrates its 7th anniversary, it is also important to underline that two factors, in my view, have assisted the Newspaper grow into a global multi-media brand/organization with newspapers, websites, and apps serving millions of readers around the world as an important media in the Niger Delta.

First, one happened on highly professionally trained journalists who understand, and are dedicated to the Niger Delta course while collaborating national and international media organisations across. This strategy has helped GbaramatuVoice become a gateway to Niger Delta-related news that is factually supported. We must recall that the region was formerly characterized by perennial violence occasioned by mutual suspicion and hostilities between the IOCs and the Federal Government on one side and host communities on the other side. Such narrative and state of affairs has since been thrown to the waste bin of history with the advent of GbaramatuVoice and its team of journalists.

The GbaramatuVoice has become reputed for bringing to the surface the hidden injustices and tensions that is always alive and active in the region to where it can be seen and treated.

Second important distinction to make is that GbaramatuVoice is a platform for pursuing the truth and the decentralized creation and distribution of ideas; in the same way, that government is a decentralised body for the promotion and protection of the people’s life chances. It is a platform, in other words, for development that the government must partner with.

As the Newspaper celebrates, one remarkable fact worth mentioning is the fact that only few people know about the identity of the man behind this media organization. I recently listened with rapt attention to his use of vivid evidence and carefully carved emotional match to demonstrate how humility, cordial relationship with staff , and his habit of putting himself in the position of others, set the stage for the success his Newspaper recorded in the past seven years.

His exemplary leadership account which I had considered strange left me lost in the maze of high voltage confusion as I laboured to fathom how possible it was for a personality in Nigeria of today to be this human and humane.

As the eagles gather to celebrate this great organization, one area or feat by the organization that needs mention is its establishment of a ‘Potential Centre of Excellence in Journalism Training’ and another, a resource Centre for Niger Delta studies.

The truth is that when completed, the centre for media training, will, similar to the United Nations Educational, Scientific and Cultural Organization (UNESCO) owned centre for Journalism Training in Africa, and that of the New York times, create a pipeline for training journalists in diverse areas of journalism in ways that will allow students immerse themselves in the field of journalism.

Jerome-Mario Utomi is the programme coordinator (Media and Public Policy), Social and Economic Justice Advocacy (SEJA), Lagos. He could be reached via jeromeutomi@yahoo.com or 08032725374