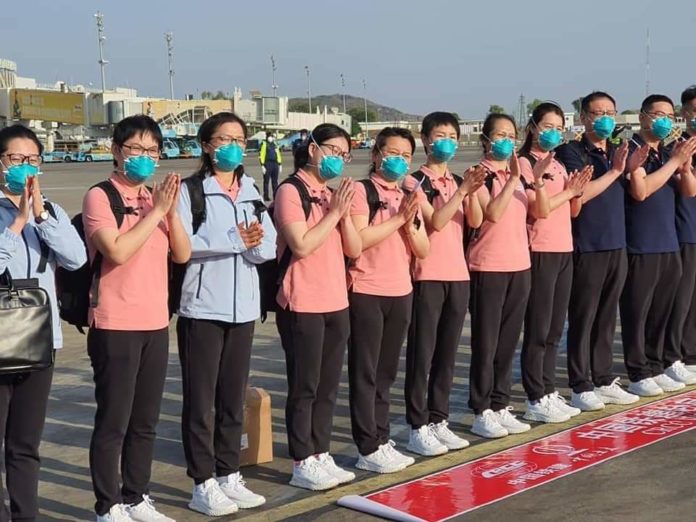 As a general rule, the first step to solving a problem is to recognize that one exists. Going by this, a fair-minded individual would characterize as historic the recent admissions by the Federal Government that the nation is currently faced with health challenge posed by the Corona Virus pandemic-tagged (COVID-19), that is currently ravaging the world.

As a response, the Health Minister Osagie Ehanire, on Friday, April 3, announced that an “18-man team of Chinese medical experts including doctors, nurses and other medical advisers” have arrived Nigeria to assist in its fight against COVID-19.

Ordinarily, such decision instead of depicting the FG as a government that is internally directed, people-focused, and externally open, it has drawn the ire of Nigerians. Particularly, Medical doctors, under the umbrella of Nigerian Medical Association (NMA), and the Trade Union Congress of Nigeria (TUC), have opposed these reported plans describing it as not just unnecessary but insensitivity to, and a slap on the great sacrifice, the local stakeholders have been making to arrest the situation.

Indeed, the value of any system depends on how it is employed. This reaction and rejection may not be unconnected with government’s failure to recognize that common understanding and purpose cannot arise without effective communication and constructive conflict, which in turn depend on inter personal skills, objectivity, active listening, giving the benefits of the doubts, and recognizing the interest and achievements of others.

Of course, there are so many reasons that qualify the government’s decision as alluring especially when viewed peripherally.

First is the believe by some commentators that even in a democracy, government is at liberty to take or discard advice and public opinion in the interest of greater good for the greater number. Public opinion in their view, do not always provide clear-cut policy guidance, and even when it is clearly in favour of a certain course of government action, the authorities may decide otherwise-particularly when they realize how uninformed, superficial, and changeable most opinions really are. Government may also reject people’s opinion as a result of its own convictions, the recommendations of the public service, or the pressure of advocacy groups

Whenever government fails to follow a clear-cut preference among the public opinion, they may actually be relying on a deeper understanding of the issue, the greater information at their disposal, a more sophisticated analysis of its implications, a concern for minority groups’ rights, or a less prejudicial attitude.

To other analysts, China has assisted not just Nigeria but Africa in their race for infrastructural development, why most nation declines the present package at this critical moment of nationhood? To further support their argument, they underlined that Chinese development aid to Africa, going by reports totaled 47% of its total foreign assistance in 2009 alone, and from 2000 to 2012 it funded 1,666 official assistance projects in 51 African countries. Also, a study found that at least 70% of China’s overseas aid was sent to Africa from 2000 to 2014.

Arguably a well structured position and in many ways, the present administration in my views may have a sincere desire to solving this challenge at hand. Yet, there are many reasons that have not only plagued the decision but render it enough reality for Nigerians to worry about.

For one thing, aside from government’s inability to remember that without our professionals, no powerful aid, or profitable advice, nor lasting remedy could be achieved, I discovered that for all its effort, such invitation at a time when China in the eyes of the world is considered corrupt and full of lawlessness; and coming in a period when Nigerian Doctors and other health workers are receiving acolades for their superlative performance.

Take for instance China, according to a rolling tracker by John Hopkins University has publicly reported 82,394 confirmed cases and 3,316 deaths. But, the White House is of the views that China’s reports have been intentionally incomplete, with some intelligence officials describing Beijing numbers as fake. “They lied to the world about the human-to-human transmission of the virus, silenced doctors and journalists who tried to report the truth, and are now apparently hiding the accurate number of people impacted by this disease,” Michael McCaul, top Republican on the House Foreign Affairs Committee, stated recently’. Also is the issue of the actual source of the COVID-19 pandemic which many believe that there is something China has not yet told the world.

It’s also worth remembering that recently, President Donald Trump of the United States of America (USA), told the world that COVID-19 is a China virus. It was in the news that some very brave scientists at the South China University of Technology claimed it escaped from a disease research laboratory in Wuhan city after one of the workers got infected.

Again, going by commentaries, particularly the statement credited to the Nigeria Medical Association (NMA), where it among other things alleged that FG adopted a non participatory approach in reaching the decision, it will not be a wrong assertion to conclude that government failed to take into consideration the extant laws regulating the practice of medicine in Nigeria as enshrined in the Medical and Dental Council Act. And demonstrated disregard for the time-honoured warning that ‘before taking a decision that has a far-reaching effect on members, leaders must write down each point of uncertainty, estimate the probability of a positive or a negative outcome in each case, and access the probable impact on the overall result if each decision should end in a negative outcome’.

Let’s keep the issue where they are.The issue is injustice. The issue is FG’s love for obnoxious policies and action.The issue is government’s disdain for facts, and their lack of curiosity to finding new information that might produce a deeper understanding of the present challenge posed by COVID 19 pandemic using Nigerian Doctors and other local stakeholders have obviously become a really that the vast majority of Nigerians now worry about.

The issue is that Nigerian government has become increasingly reputed for not patronizing local content. The issue is that there is no clear definition of our problem as a nation, the goals to be achieved, or the means chosen to address the problems and to achieve the goals. And finally, the issue is that the system has virtually no consideration for connecting the masses with good means of livelihood.This is the only possible explanation for this situation.

These lead this piece to another observation.

With this blatant failure to respect and harness pool of Nigerian Doctors who are currently unemployed and underemployed, it is obvious that the nation has reached a stage were Nigerians can hardly recognize it when seen in the mirror.

Hence, the rights to complain remains not a privileged but an organic necessity-for without objective criticism, the government cannot govern; as there is no adequate way in which it can keep itself informed about what the people of the country are thinking.

In all these, one thing tends to standout, Nigeria as a country needs to productively collaborate with China but not in this direction that the FG is headed. The country need to learn how China promoted local contents, preached and pratice stability and cohesion in society; and develop the culture of great reverence for education and knowledge.