Even though the event was low-keyed because of the unfortunate demise of one of the Eze’s wives, the people still thronged the palace on the first day of the 8 days long event.

Dignitaries and members of the council of chiefs were all present when a ram was offered as sacrifice to the gods in the king’s palace after which it was used for the local yam pottage delicacy for all to partake of with drinks.

In his address to newsmen, the oldest man in the kingdom —Chief Emmanuel Okirie, Eze Okiriebe 1 of Ogbaland, thanked God for making the day a reality and for them to witness another Egwu Ogba in good health.

“No one can eat the new yam without the Eze marking this festival. Farmers are now free to harvest their crops. The festival usually lasts for 8 days but this year, it is low-key because our king lost one of his wives,” he explained and urged the people to continue to be peaceful and law abiding as they go around visiting their relations and friends, which is a part of the festival. The usual gathering of dance groups from all the parts of the kingdom was left out of this year’s event.

Chief Okirie ended his speech by calling on the government to continue to support the development strides of the king and promote his stool to 1st Class as his people have accepted him whole-heartedly.

In his response, Eze Igwe III thanked God and all who made the event possible. He particularly thanked the ONELGA chairman, Hon. Vincent Job, for supporting farmers in the area with cassava seedlings last planting season but urged him to support them with yam seedlings and mechanized equipment during the next planting season.

“The harvest this year is quite rich without any accident or mishap recorded on our farms. We are gathered here to celebrate the Egwu Ogba Festival without any negative event in our farms. The harvest, this year, is rich in yams, cassava, coco yam and plantain,” he said adding that the people are now free to start eating the new yam as all the necessary sacrifices to the gods in the palace and in Amah, the ancestral headquarters of the kingdom, have been concluded.

His message to the people is that they should love agriculture and he asked the local government, as the 3rd tier of government, to also support the farmers with yam seedlings and mechanized equipment so there can be food security in the state.

“The event, this year, is low-keyed since I lost one of my wives but it has to hold as ancestral fathers cannot close their doors. The community and clan has to go on with administration,” he explained.

A wrestling contest held a day later at Amah.

Dear readers, every day in the Niger Delta, we work hard to provide readers such as you with the most accurate, up-to-date, and comprehensive information. Quality journalism costs money. Today, we’re asking that you support us to do more in the Niger Delta and beyond. Your support means that GbaramatuVoice can keep offering journalism to everyone in the world. 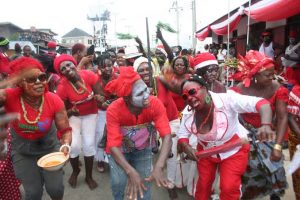 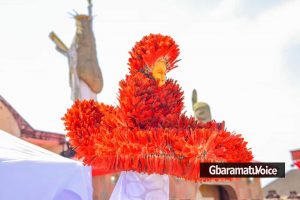 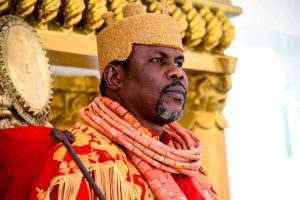