The Director General, Contact and Mobilization, Ovie Omo Agege Campaign Organization, Chief Bosin Ebikeme, has joined the list of prominent Nigerians that congratulated the Deputy Senate President, Obarisi Ovie Omo Agege, on the National Award of Commander of the Order of the Federal Republic (CFR), bestowed on him by His Excellency, President Muhammadu Buhari, President and Commander-In-Chief, Federal Republic of Nigeria, on Tuesday, October 11, 2022, in Abuja. 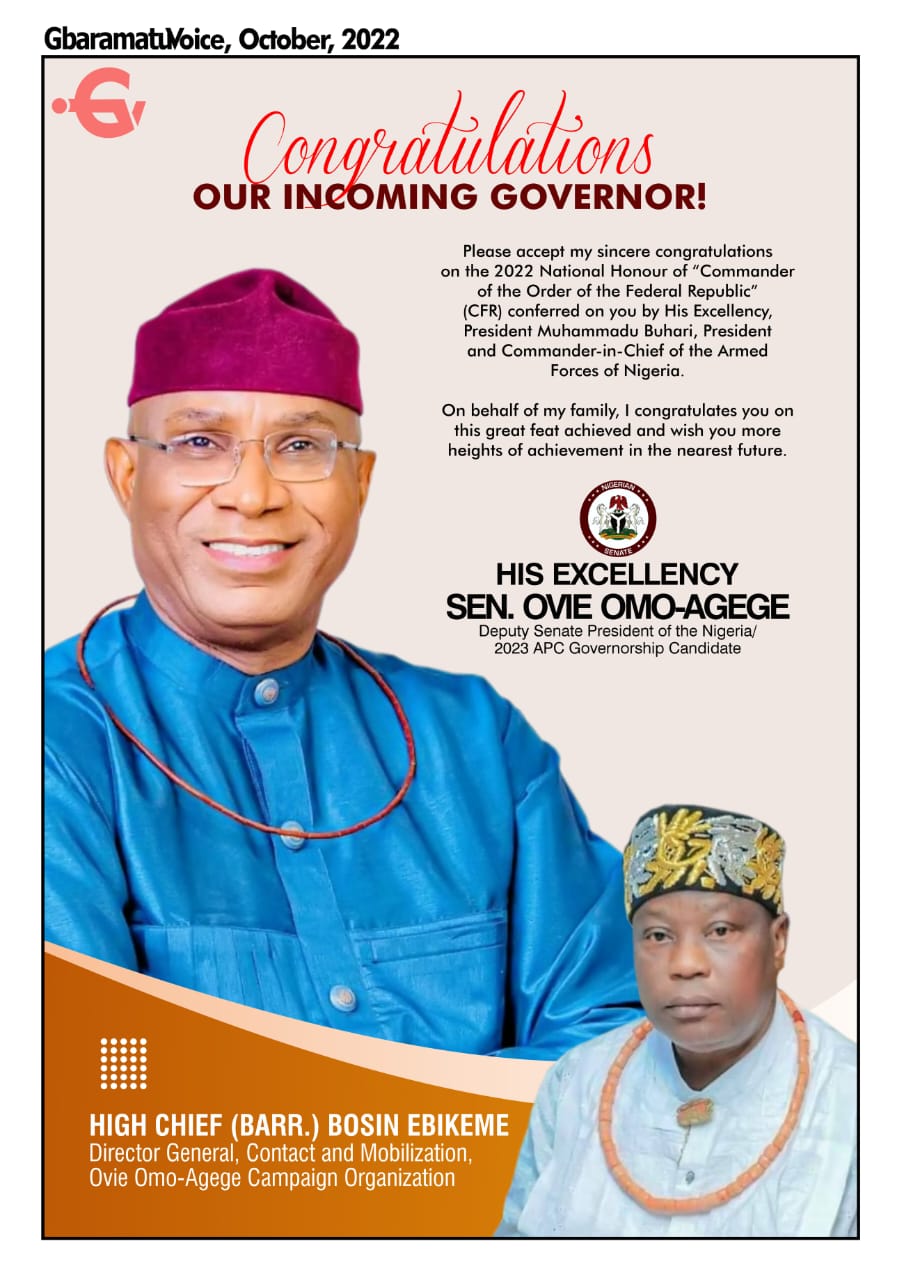 Ebikeme in a statement personally signed by him and made available to GbaramatuVoice in Asaba, the Delta state capital.

According to the release, “the Commander of the Order of the Federal Republic (CFR), bestowed on you is a sure testament of, and reward for your unrelenting efforts and contribution towards building a new Nigeria where peace, love and sustainable development shall reign supreme.

The Delta State Former Commissioner for Transport explained that as a ranking senator, Ovie Omo-Agege redefined lawmaking in Nigeria. He has given quality representation to the people of his Senatorial District and Nigerians as a whole.

In his words, “As the Director General, Contact and Mobilization, Ovie Omo-Agege Campaign Organization, I know Distinguished Senator Ovie Omo Agege, the Deputy Senate President (DSP). He is my principal. I can also say without fear of contradiction that he has sponsored quite a number of bills in the senate aimed at uplifting the life chances of Nigerians.

“He is human, humane and development minded. I believe that his colleagues in the senate recognized these facts, and that informed their decision to elect him as the Deputy Senate President. And I also believe that he (Deputy Senate President) has neither disappointed his colleagues in the senate nor Nigerians as a whole. So, this award is a reward for the long standing sincere efforts and services he rendered to humanity and the nation Nigeria.

He urged the Deputy Senate President to consider the latest award as a call to greater national duties, particularly as he prepares to assume, by the special grace of God, the Governorship of Delta state.

‘The award is a sign of what is to come. It will definitely user in victory in the forthcoming Delta state governorship election.

“On behalf of my family, I congratulate you on this great feat achieved and wish you more heights of achievement in the nearest future, the statement concluded.