Delta State Chapter of the People’s Democratic Party (PDP) on Tuesday directed all its local government wards to produce their delegates for national and state primaries.

This directive was issued in Asaba during a meeting of high taking political stalwarts, party aspirants with Governor Ifeanyi Okowa and his predecessor; Dr Emmanuel Uduaghan in attendance.

ALSO READ: FOR THE RECORDS: What Chief Edwin Clark said about Delta 2023 Governorship, Okowa and the Ijaw Agenda

Those who attended the meeting were Governorship, Senatorial and House of Assembly aspirants, local government chairmen, former and current members of the State Executive Council of PDP and members of the PDP Board of Trustees amongst others.

All wards were directed to forward three delegates each while local government divisions of the party are to produce one national delegate each for the party primaries.

At the meeting held behind closed doors, Governor Ifeanyi Okowa reiterated his commitment in ensuring free and fair primary elections that would produce the flag bearer of the party in the 2023 elections.

In the same vein, former Governor of Delta State, Chief James Ibori lauded the party Exco for scheduling a stakeholders meeting, stating that it was the most appropriate time due to the nearness of the primaries.

Meanwhile, State Party Chairman of PDP, Barrister Kingsley Esiso, dismissed rumours spreading across the political terrain that Governor Ifeanyi Okowa had anointed a successor amongst the aspirants, stressing that no candidate will be handpicked to ensure a level playing ground for all. 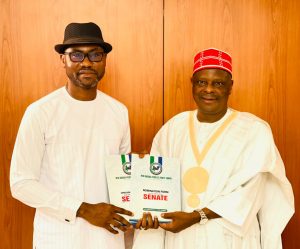