“And so it seems that people who write about happenings in their environment both intended and extended, whose thoughts grip the perception being quantified, do not stumble accidentally into their status, they achieve it through the deep knowledge they have acquired often painfully about their society”

The Center for Politics and Strategic Studies, a non-governmental and civil liberties organization, has said that given Senator Omo Agege’s eminent standing in Delta State recently, especially considering the hype that has accompanied his being Deputy Senate President, it does not see how in a hypothetical political variable any of the present Urhobo PDP aspirants angling to be the PDP candidate under the spurious DC-23 agenda can defeat him given the Urhobo veiled and concealed antipathy towards the PDP over what it claims as denial of its assumed demographic advantage to eternally govern Delta State.

The Executive Director of the Group, Dr Ransom Etadaferua, in a statement issued at Asaba on Monday said “Undoubtedly, and even so Senator Omo Agege’s prominent activities on the national stage recently and his repeated visits to Delta State, together with the political alliances and alignments he is building presents him as a candidate to beat for the All Progressives Congress in 2023 Delta State guber elections.”

He opined that the Senator “has been upbeat about this and appear to be mobilizing a welter of political support across the central and some components of Ika, Ndokwa, Aboh, Aniocha, Oshimili, Isoko, Itsekiri of the Delta North and South senatorial zones.”

He further emphasized that the Senator’s “public arrogance exhibited in his open repudiation of the electronic transmission voting platforms and tinkering with significant clauses of the Electoral Act, are all indexes of this goal and given the complex of a weak opposition in the APC around his present aspiration, he does not see how another aspirant would assail him in the APC party primaries.

Reacting specifically to what he identified as “high flung formulations and calculations sometimes borne out of the gregarious air of ownership of knowledge which in most cases may seem inevitable but often are flawed and do not come through, among PDP Leaders in Delta State” many of whom according to him, “have replaced skepticism with cynicism, and politics for witch-hunting, an attitude that has made many of its party people to prevaricate with the truth just to gain an advantage, to be reluctant to criticize because that would place them on the side of the anti-party clause.”

The center insisted It is in the context of these “fundamental realities, that we sound this alarm with the note and precision of the old seer to scare our political leaders with the starkness and urgency of the situation, to perhaps get them a little better behaved than they were inclined ordinarily to be”

“It is our informed perception, that any note of caution which draws its sustenance from the life lived around it and develops practical identification with solutions appropriated from it to stable the existential priorities of that life has a good chance of achieving the quality and assurance of continuity.”

Etadaferua impugn what he calls “the construction and nature of the state and party politics in Nigeria” which he said tend towards “the institutionalization of fiefdoms and politics of entitlements manifested as dubious rotation agenda orchestrated through the hideous platforms of an inherently discriminatory practices such that rather than provide common bond for interaction across the aisle with equal rights, privileges and obligations both in precept and in practice the state furthers their bifurcation.”

He said the mob rejection of this attitude was implicated in the recent disavowal of the Okpe people, who through their Okpe Union and overwhelmed by the continued marginality of an unfair and dubious zoning system that is insensitive to its plights, had asked His Excellency Gov, Ifeanyi Okowa and the State House of Assembly to recognize Okpe as a distinct ethnic group.

“This fixation by Okpe group for a distinct identity exposes how insincere the Urhobo disregard for micro ethnic sentiments within its fold has been,” the center was quoted to have said.

Dr Etadeferua recalled how the PDP, “with majority in the National Assembly in the twilight of 2012, and with a sitting President, soon got incorporated into the organ of a monolith whose function was to advance the cult of the personality of its political leaders.”

“They became the chosen ones, the anointed ones and perhaps the saviors.”

“No one thought political leaders like all mortals, are themselves susceptible to the vagaries and mutability of the human nature.

“No sooner afterwards megalomania crept in and the political leaders got grouped into an old boys’ club that drew from the clout symbol of the party to safeguard their positions across the party structures and sooner than afterward they assume infallibility.

“This was expectedly accompanied by the complicity of a cluster of “our leaders dey work we dey see am” kind of blind loyal party men who played to the gallery in the deification of the political leaders and soon enough played down on their excesses.”

“Perhaps unfortunately, the fate of the Party became sealed in the circumstances and in the hands of these visionless and plan less characters in the old boys’ club who brook no opposition and before they could readjust on their transformation priorities they lost control of the central government in 2015 and with it, the National Assembly.”

He queried that “those factors that elicited the populist evocations that saw to the demystification of the PDPs political behemoth appear to still trail it in Delta State today.”

In the context of this confusing plurality, Etadaferua insists that “the Delta PDP and its managers are left at the center of a very tricky intersection. Any false move borne out of precipitated over awe to concede to the DC 23 stampede will be unadvisedly costly and delusory.”

He recalled what the Traditional Prime Minister of Tuomo Kingdom High Chief Mike Loyibo told a DC 23 delegation that came to consult with him at his country home and palace at Tuomor- Ijaw that “… our argument is justice and fairness. Ijaws are saying they have been part of supporting complementing and making governors. “Can’t Urhobo and Delta people give us chance to also produce Governor this time around?”

The center offered its closing submission by insisting that “given that the Ijaw as an ethnic people in Delta State have basically remained grossly socio economically dependent and under developed, persistently disempowered, socio economically marginalized and psychologically alienated, they hold the aces to who should most suitably appeal to the Delta public for Governor to continue on the critical road map for development of Delta State after Gov. Ifeanyi Okowa.”

He said “this approach should be interpreted as a strategy to politically assuage a people that has experienced and endured the pain and agony of neglect, exploitation, degradation disenchantment and cynicism.”

“The prospective Ijaw individual should not be the usual career politician that dots the hall of legislative representation in a paranormal of “do nothing say nothing” transpose, but one that is sufficiently trained in the job, who is candid and dispassionate, assertive and will symbolize the hopes and aspirations of all Deltans at home and in the diaspora, who would sustain what has been achieved by this government and improvise on other contingent work plans that would guarantee a robust, far reaching, comprehensive and awe inspiring legacy,” he said. 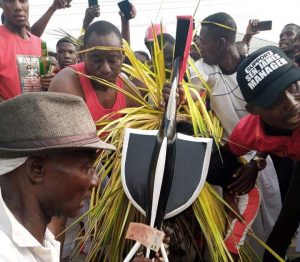