Olorogun David Edevbie has emerged as the consensus candidate and preferred choice for the Urhobo Progress Union (PDP) for the 2023 governorship election on the platform of the Peoples Democratic Party (PDP) in Delta State.

According to the statement, the UPU had a brain-storming session with each of the Urhobo aspirants from the Delta Central Senatorial District before reaching the decision on Olorogun Edevbie.

The statement reads in part: “That to present a united front in the forthcoming primaries of the Peoples Democratic Party (PDP), the UPU had a brain-storming session with each of the Urhobo aspirants. All the aspirants who presented themselves before the UPU in the four-day interactive session, performed brilliantly. 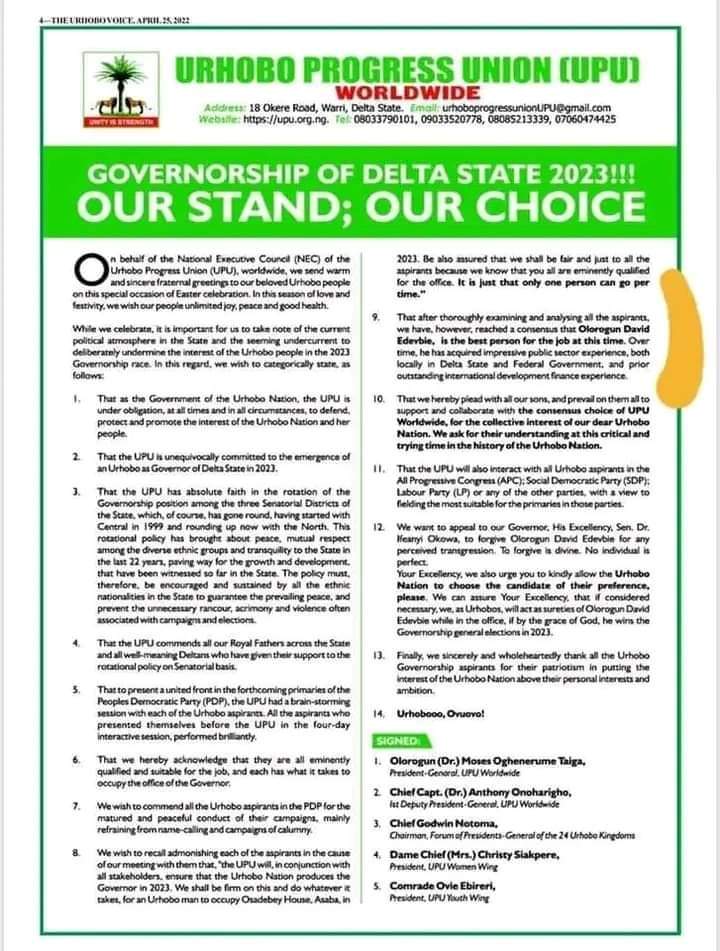 “That we hereby acknowledge that they are all eminently qualified and suitable for the job, and each has what it takes to occupy the office of the Governor.

“We wish to commend all the Urhobo aspirants in the PDP for the matured and peaceful conduct of their campaigns, mainly refraining from name-calling and campaigns of calumny.

“We wish to recall admonishing each of the aspirants in the cause of our meeting with them that, “the UPU will, in conjunction with all stakeholders, ensure that the Urhobo Nation produces the Governor in 2023. We shall be firm on this and do whatever it takes, for an Urhobo man to occupy Osadebey House, Asaba, in 2023.

“Be also assured that we shall be fair and just to all the aspirants because we know that you all are eminently qualified for the office. It is just that only one person can go per time.”

“That after thoroughly examining and analysing all the aspirants, we have, however, reached a consensus that Olorogun David Edevbie, is the best person for the job at this time.

“Over time, he has acquired impressive public sector experience, both locally in Delta State and Federal Government, and prior outstanding international development finance experience”.

Meanwhile, the UPU in the statement urged all sons of Urhobo, and prevailed on them all to support and collaborate with the consensus choice of sociocultural organisation, while appealing to the State Governor, Sen. Dr. Ifeanyi Okowa to forgive Edevbie for any perceived transgression.

The UPU stated that it will also interact with all Urhobo aspirants in the All Progressive Congress (APC); Social Democratic Party (SDP); Labour Party (LP) or any of the other parties with a view to fielding the most suitable for the primaries in those parties.