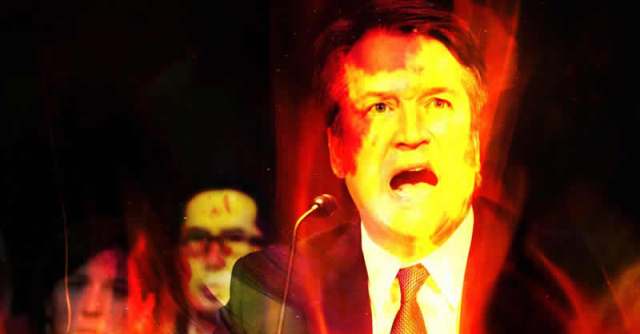 A spiritual battle for the soul of the newly confirmed U.S. Supreme Court Justice, Brett Kavanaugh, took the centre stage on Saturday as a coven of New York witches placed a curse on Kavanaugh.

In reaction, some leaders of America’s Catholic Church have countered the curse by “standing in the gap” for Kavanaugh, whom the church celebrates as “pro-life and anti-abortion.”

Dozens of witchcraft fans and curious minds attended the event at Brooklyn’s Catland Books, while the event was also streamed online for effective viewership.

Organisers said the event was “an act of resistance and resilience.”

The American Senate had voted 50-48 on Saturday, October 6, to confirm President Donald Trump’s nominee, Brett Kavanaugh, to the Supreme Court.

Kavanaugh’s nomination appeared to be in jeopardy for weeks, after multiple women came forward to publicly accuse him of sexual misconduct in high school and college. Kavanaugh denied the allegations in statements and testimony.

Pro-abortion groups had loudly denounced Kavanaugh as a “serious threat to women’s right” to abortion, fearing he will protect the life of unborn babies in his rulings.

Dakota Bracciale, co-owner of Catland Books and one of the organisers of the cursing event, said they would not share details or specifics of “the spells,” but told the BBC that the curse was “aimed at exposing Brett Kavanaugh for what he truly is, to cause him harm and see him undone.”

The Catland Books is a metaphysical boutique and occult bookshop in Brooklyn, New York, and they titled the event, “The Ritual to Hex Brett Kavanaugh;” while also targeting some other “enemies.”

The event held for three hours, starting at 7 p.m., with the organisers swearing down that “all rapists and the patriarchy which emboldens, rewards and protects them” will be cursed.

While the organisers were unable to state, categorically, when the curses would effectively take effect on their object, they expressed confidence that it would be “as soon as possible;” adding: “There’s not a firm timeline on these things.”

Tickets to the event quickly sold out, with the organisers saying that half of the proceeds would be donated to charities, including the women’s health group, Planned Parenthood.

But Catholics and exorcists are not backing down, as they have responded to the news, “fire for fire.”

A Catholic priest and exorcist for the Diocese of San Jose, California, Father Gary Thomas, opted to counter the spell by saying prayers for the justice at Mass.

“This is a conjuring of evil — not about free speech,” Father Thomas told the National Catholic Register.

While the event gathered momentum earlier last week, Father Thomas offered Mass for Kavanaugh on Thursday and also on Saturday, the D-Day.

His training in Rome was the subject of the 2010 book, The Rite: The Making of a Modern Exorcist, that was made into a movie in 2011.

In the 12 years since becoming an exorcist, Father Thomas said that he had witnessed people in the satanic world becoming bolder.

“They are more confident that the general public will be more accepting of the demonic,” he lamented.

By contrast, Father Thomas noted that throughout history, satanic groups have been secretive, but now they are making it public in the name of freedom of religion.

“This is a conjuring of evil — not about free speech,” he said. “Conjuring up personified evil does not fall under free speech. Satanic cults often commit crimes; they murder and sexually abuse everyone in their cult,” he warned.

Father Thomas said that those involved in the curse on Kavanaugh clearly believe in the power of personified evil. “They are going to direct the evil to have a permanently adverse effect on the Supreme Court justice.”

He, however, gave Kavanaugh hope, noting, “When curses are directed at people in a state of grace, they have little or no effect.”

Except for grace, the Catholic priest warns, “harm could come upon people such as physical illness, psychosis, depression and having demons attach to them when cursed”.

He explained that curses sometimes involve a blood sacrifice, either through an animal or a human being, such as an aborted baby.

“The decision to do this against a Supreme Court justice is a heinous act and says a lot about the character of these people that should not be underestimated or dismissed,” Father Thomas warns. “These are real evil people.”

A manager at a Catholic apostolate was also inspired to fast and pray the Rosary for three days and to give alms to counter the witches’ intention.

She asks that “God will have mercy on those involved, that He will give everyone the grace of faith and repentance, and that He will grant spiritual protection to Brett Kavanaugh.”

The unnamed church manager said they were giving alms because, “St. Augustine said that fasting and alms-giving are the wings with which our prayers fly safely and are more easily carried to Heaven, where Christ our Peace has preceded us.’”

Another trouble for Omo-agege as DSS spurs to investigate him