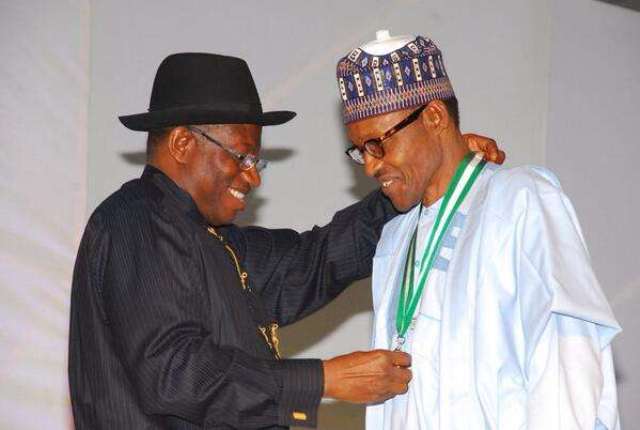 President Muhammadu Buhari has again commended former President Goodluck Jonathan for accepting the outcome of the 2015 presidential election which he (Buhari) won.

Buhari spoke while hosting some entertainers of the Northern Nigerian extraction, Kannywood, to a dinner at the Presidential Villa, Abuja on Thursday evening.

The president who spoke in the Hausa language said he would continue to hold Jonathan in high esteem because of that decision.

The President said, “I will continue to hold former President Jonathan in high esteem as a result of that singular act.

“He (Jonathan) was in power as deputy governor, Governor (Bayelsa), Vice-President and President, all for about 10 years and he voluntarily accepted defeat and surrendered power to me.”

He urged the entertainers to continue to use their talents to promote the culture of peaceful co-existence and unity among the diverse socio-political groups in the country.

The Secretary to the Government of the Federation, Mr. Boss Mustapha, claimed that the fans of the entertainers would guarantee Buhari at least five million votes in the 2019 presidential election.

He, therefore, urged them to use their platforms in the social media in promoting the achievements of the Buhari administration.

Mustapha thanked entertainers for the roles they played in 2015 elections which contributed immensely to the victory of Buhari in the presidential election and called on them to repeat the same in 2019.

Representatives of the Kannywood entertainers, who spoke at the event, pledged to mobilise support for Buhari and other candidates of the All Progressives Congress in the forthcoming elections.