The sleepy but egalitarian Ikoro community, the traditional headquarters of Olodiama kingdom in Ovia North East and North South West Local Government Areas of Edo state, on November 14 and 15, 2022, witnessed influx of human and vehicular movement in, and out of the town as Ijaw traditional rulers across the Niger Delta and other dignitaries converged in the community to celebrate the 5th coronation anniversary of the Pere of the kingdom, His Royal Majesty, Godwin Ogunoyibo, Alagbabunafa III.

The event was planned to succeed, and it did not only succeed. Rather, it emerged as both a celebration to behold as well as an event the entire Olodiama indigenes will talk about for a very long time.

The event which started with Ogele (procession) saw the Pere of the kingdom, joined by other Peres from different kingdoms, offering supplication to the Egbesu deity. The rich culture and tradition of Izon was brought to the fore as Owu (Masqurade) from the Kusan community, Olodiama kingdom, entertained guests with an acrobatic display.

As the supplications and Ogele were going on at the Osobu (Egbesu shrine), with faithful and others chanting and dancing, the atmosphere in the community became frenzy and charged when the Pere of Gbaramatu kingdom, Oboro-Gbaraun II with his chiefs and other dignitaries arrived with over ten Prado Jeeps convoy and tight security comprising men of the Nigerian Army and mobile policemen.

His arrival was announced with a seven gun salute and immediately after he joined other Peres (kings) at the Osobu in the supplications process as the chanting and dancing continued.

In his speech, the Pere of the kingdom, Alagbabunafa said the coronation anniversary was a reminder of the installation of his grandfather, which according to him was as well attended by dignitaries including the then Oba of Benin, HRM, Oba Akenzuwa II in 1958. He added that the then Oba Akenzuwa was represented by the then Crown Prince, adding that the throne was gazetted in 1973.

His words: “The Alagbabunafa I, HRM Asulu Ogunoyibo, whose installation ceremony in 1958 was graced by representatives of many traditional rulers, including the then Oba in Bini, His HRM Oba Akenzuwa II who was ably represented by the then crown prince, now the immediate past Royal Majesty, Oba Erediawa of blessed memory.

He continued: “It is on this record that Olodiama kingdom has since been recognized by the then Mid-west regional government as contained in the gazette number 58 of October 18th 1973, Volume 10 with his staff of office as a first class traditional ruler which runs up till the time of Bendel State, but now has become an issue few years back with the creation of Edo State.”

While calling on the present Obaseki-led government to do the needful by giving recognition to the ancient throne, Alagbaunafa thanked all Ijaw traditional rulers, Ijaw sons and daughters for attending the ceremony.

INC President’s Message to the outside world

On his part, chairman of the occasion and president, Ijaw National Congress, Prof. Benjamin Okaba congratulated the Alagbabunafa for the reign on the throne of his forefathers; just as he added that the Olodiama throne has been inspiration to him since after he attended the installation of the Alagbabunafa II during his campaign for the president of INC.

He said in part: “I was present when our king of ancient Olodiama kingdom was installed, and that day I made a promise that should I win the INC election, I shall continue to visit the kingdom, because for me it is a source of inspiration.”

The erudite Professor used the occasion to warn those threatening the existence of the Olodiama and Edo Ijaw in general to desist from such acts. He said the Ijaw speaking people, regardless of the state, are one hence the Ijaw speaking people in Edo State are not alone should anyone nurture such thought. He noted that the Olodiama Ijaw are the aboriginal of the area hence no one can deny them of this.

“The Ijaw people are the Aboriginal owners of this place, Ijaw man is not a stranger in Olodiama; the Ijaw man is not a tenant in Olodiama, this is our home – original home, and no body, I repeat, nobody can change that fact. Today, we want to make it clear that our people in Edo State are not alone. An injury to one Olodiama man, is an injury to over 15 million Ijaw people.

Okaba who expressed joy for the anniversary and the unity and solidarity exhibited at the coronation anniversary, said Olodiama kingdom is an ancient kingdom that was gazetted in the early 70s, hence no one can change it.

He added: “Today is a day of joy because our king is five years old in the throne, and from the record, this particular throne was officially recognized in 1973, several years ago. It was gazetted, and recognized, so the recognition is from the beginning. So, it is not a kingdom of yesterday. It is a kingdom that has the recognition of the government from Midwest, to Bendel then to Edo. So, the present Edo State Government does not have the capacity to do otherwise. This throne must be recognized,” Okoba declared.

Okaba said: “If the Edo State government had given us the due recognition, the Internally Generated Revenue (IGR) of Edo State would have improved. Let the government of Edo State hear this, unless you are at peace with the Ijaw people, the state will continue to remain one of the poorest states in this country. The mineral resources are all domiciled in Ijaw land in this state, so, instead of you coming to the people that own the resources and saying ‘we are together’, you want to change Gelegele to something else, it is not possible! If you don’t recognize us, you will remain poor.

While appreciating the kings and other dignitaries for the show of love and solidarity, the INC President noted: “Ladies and gentlemen, today I am so glad that we have our kings from Ondo State, from Rivers State, from Delta State, from Bayelsa State in solidarity with our king, Alagbabunafa. That he is not alone, and that when he cries they will cry with him, and when he celebrates, they will celebrate with him, I appreciate you all.”

Earlier, Chairman, Planning Committee, Chief Robinson Ogunkoru, while appreciating the entire Ijaw nation for the love and solidarity shown, said it was a unique moment for the Olodiama sons and daughters to remember their roots as Ijaw people. 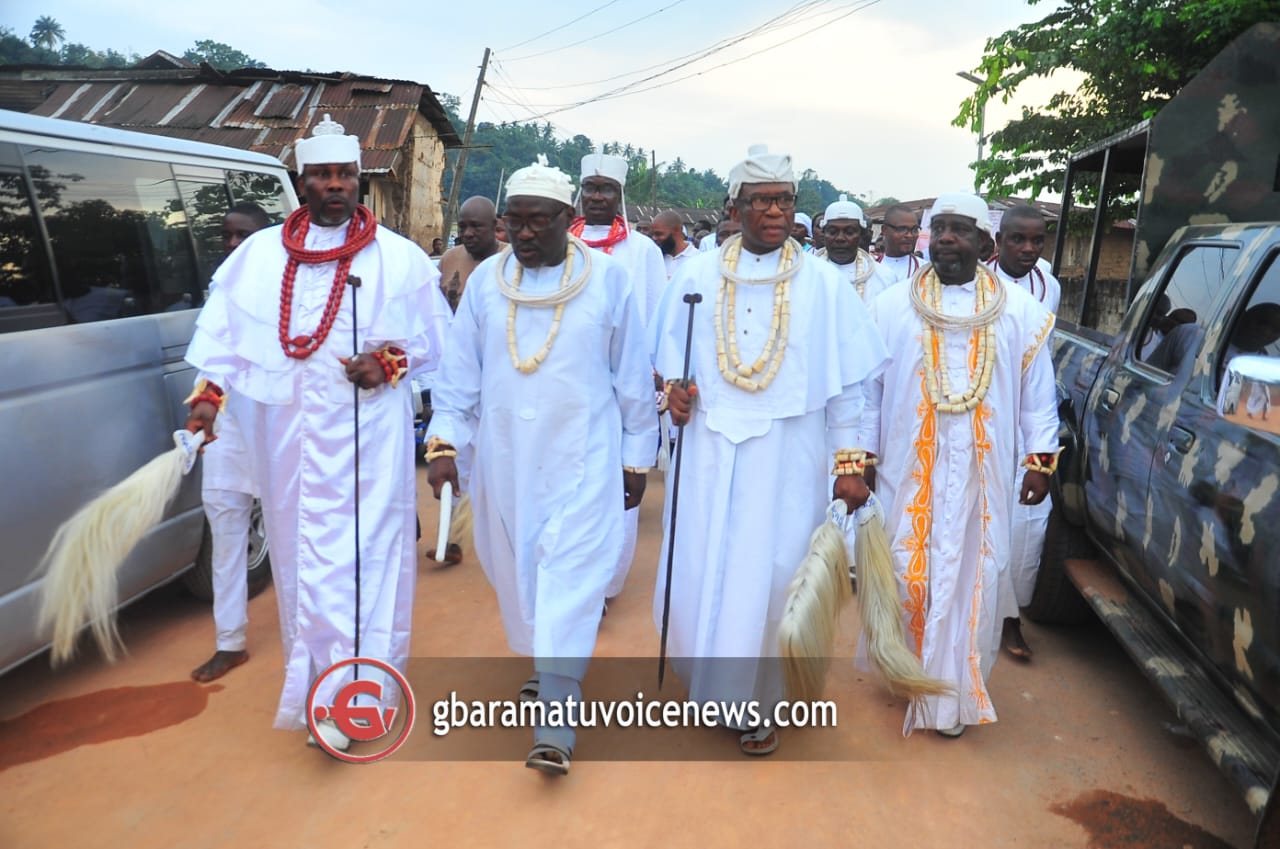 He added: “Our major concern should be sincere love, unity and cooperation so as to survive the hostile environment we found ourselves in Edo State. This ceremony provides a special forum to respect our existence culturally, spiritually and socially.”

The array of Ijaw kings and other illustrious Ijaw sons and daughters across the Niger Delta present at the occasion was indeed an affirmation of Barrister Smooth’s album – ‘Ijaw Ibe, we are one’. The Paddle of Niger Delta was, of course, living in Ikoro to entertain dignitaries and also used his music to re-echo the oneness of the Ijaw people and the need for unity. Another Ijaw musician, Abora also played his role at the occasion.

In a related development, High Chief Government Ekpemupolo (A.K.A. Tompolo), the ‘Ibe-Ebidouwei of Ijaw Nation’.-and Global Ambassador of the Ijaw people. Joined the very long list of dignitaries that felicitated with the Pere of Olodinma kingdom, His Royal Majesty, Godwin Ogunoyibo, Alagbabunafa.

In a statement pwersonally signed by him, High Chief Tompolo described the Pere as passionate leader that loves his people and Ijaw nation as a whole. Tompolo said that as a custodian of Ijaw culture and tradition, Pere of Olodinma kingdom has demonstrated a high level understanding of Ijaw culture and tradition. In the past five years of being on the throne, Ijaw nation have seen the difference. We have felt your impact and we are proud of your achievements, Tompolo said.

He therefore on behalf of his family , friends, and associates, rejoiced and celebrates with HRM Godwin Ogonyibo, Alagbabunafa III, Pere and Agadagba of Olodiama kingdom in Ovia North East and South West Local Government Areas of Edo state, Nigeria, and prayed for God’s continued guidiance and protection on him and all his endeavours.

Indeed, the gathering of array of distinguished traditional rulers, eminent leaders and elders of the Ijaw nation in the Niger Delta region from far and near as well as other ethnic nationalities, was indeed a reminder and signal to the outside world that the people of the Olodiama, though small, have brothers/kinsmen who are with them and have not forsaken them. It was also a display of the Ijaw unity and oneness.